K-pop acts shift their focus from local to global: Capitalizing on the hunger for Korean culture abroad, groups focus on foreign fans

K-pop acts shift their focus from local to global: Capitalizing on the hunger for Korean culture abroad, groups focus on foreign fans 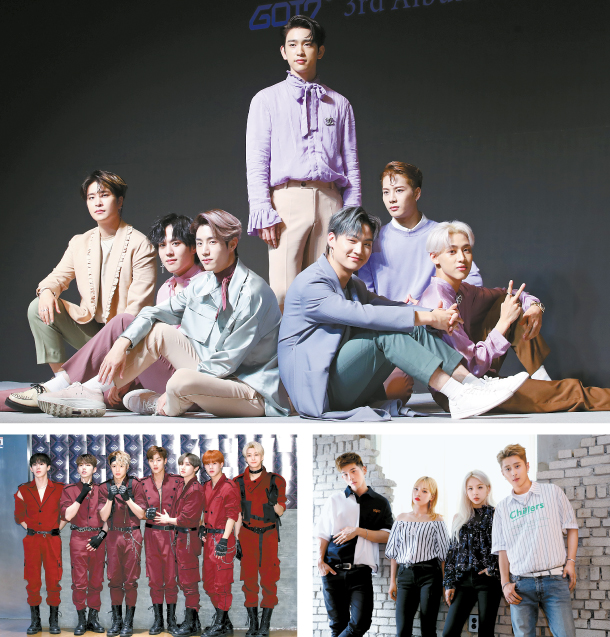 K-pop groups GOT7, top, Monsta X, bottom left, and KARD, bottom right, have all focused on building large fanbases abroad through social media and world tours instead of only appealing to local audiences. [ILGAN SPORTS, NEWS1]

Ever since boy band BTS achieved global fame, media outlets have been busy trying to figure out the formula to the group’s success. While some attribute the group’s rise to their unique dance moves and music, others point to their active engagement with fans on social media. Without a clear answer, many have concluded that BTS simply arrived “in the right place at the right time.”

What was clear, however, was that the group had built a massive fan base abroad even before making a name for themselves in Korea.

The success of BTS has led major entertainment agencies to have their newest acts follow the same path: by using K-pop’s global popularity to their advantage, groups can establish an international fan base that is far bigger than the one the Korean market can offer through social media and international touring. This is in stark contrast to previous strategies, where only K-pop acts that gained popularity in Korea first were thought of as being able to launch careers overseas.

Composed of seven members from Korea, Hong Kong, the United States and Thailand, boy band GOT7, from JYP Entertainment, is a prime example of a K-pop act that is very successful overseas. Soon after the group debuted in January 2014, they signed a contract with Japan’s Sony Music Entertainment, and introduced themselves at a showcase in front of 9,000 people. This was followed by their first tour of Japan in October of that year, which attracted a total of 25,000 fans, according to JYP Entertainment.

The group went on their first world tour in 2016, holding fan meeting events in major cities around the world, including Vancouver, Osaka, Singapore, Taipei, Washington and L.A. They have continued touring globally, and even made stops in Mexico, Argentina and Chile during their “Eyes On You” world tour this year. Despite it being their first time visiting Latin America, a total of 28,000 fans turned up to their concerts throughout the region, according to the agency in July.

Analyst Lee Ki-hoon from Hana Financial Investment Co. attributes the group’s success abroad to JYP Entertainment’s YouTube marketing strategy. According to his report “K-pop Invasion,” released in October, most of the group’s YouTube views have come from Thailand, followed by the United States, Brazil and Mexico in recent years. This led the agency to shift its focus to these regions. The group’s latest song, “Lullaby,” was released in four languages - Korean, English, Chinese and Spanish - in an attempt to appeal to fans all around the world, according to Lee.

Another remarkable overseas success story is that of boy band Monsta X. Following their debut in 2015, the group launched their own YouTube reality series “Deokspatch X” and communicated with their fans through V Live. One of the reasons for their success, according to the group, was their online presence.

“We tried to actively communicate with fans from abroad through social media,” said member I.M during an interview in October.

“Wherever we go, we try to learn how to communicate with our fans. I think that is why we became popular abroad,” added member Kihyun.

After successfully reaching their fans overseas, the group kicked off two world tours last year, and they will be the first K-pop group to perform at iHeartRadio’s annual Jingle Ball concert series in the United States from Nov. 30 to Dec. 5, along with other popular singers Camila Cabello, Shawn Mendes and Cardi B.

Fans of mixed gender group KARD also hail from all over the world. The group kicked off their world tour in the United States in 2017, right before the release of their first EP “Hola Hola.” Since then, they have become popular in Europe and South America.

“I think [our popularity] is due to our music genre,” explained member Jiwoo during an interview with SPOTV News in July. “People love our reggae-dance music. They also like the fact that we are a mixed gender group, which is rare in K-pop.”

Thanks to their success in the opposite side of the world, the group toured Latin America this year, making stops in Mexico, Colombia, Chile and Argentina.

“K-pop itself is already popular worldwide, so they can promote their music worldwide through social media,” says culture critic Kim Heon-sik. “[In the future,] agencies will train their artists in a way that they can appeal to fans abroad.”