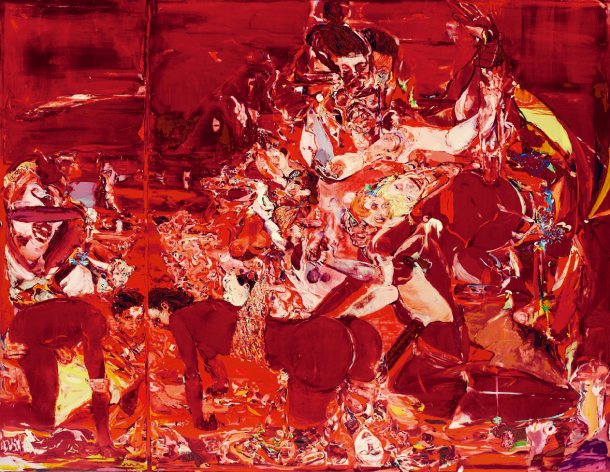 The painting, “The Pyjama Game”(1997-8), became the famous artist’s second most-expensive painting ever sold at auction, according to Seoul Auction. The work looks like an Abstract Expressionist painting at a glimpse, but is actually a figurative painting with fragmental narratives about sex and violence.

During the auction, the onus of which was on Western art masters, pop artist Roy Lichtenstein’s “Still Life with Attache Case”(1976) fetched 35 million HK dollars and Louise Bourgeois’s marble sculpture “Cleavage” (1991) sold for 15 million HK dollars. But Andy Warhol’s painting over silk-screen print “Self Portrait” (1986), expected to be another highlight of the auction, failed to find a bidder.

Some 88 percent of the art pieces up for auction were sold for 132 million HK dollars, Seoul Auction said.

Meanwhile, at K Auction’s sale in southern Seoul last Wednesday, the painting “People in the Marketplace” by Park Soo-keun (1914-1965), one of Korea’s most beloved modern artists, failed to find a bidder, despite expectations that it could beat the artist’s record and become one of the 10 most expensive Korean paintings ever auctioned.

The painting depicts women selling goods in a marketplace, one of Park’s favorite subjects. It is painted in Park’s signature style - the colors remind viewers of soil and stones and the unique texture has the feel of granite.

“The minimum bid was set too high, perhaps considering the highest price ever paid for a work by Park was 4.52 billion won for ‘Washing Place’ in 2007. ‘People in the Marketplace’ is much smaller than “‘Washing Place,’” said So Jin-su, an art market expert and professor at Kangnam University in Yongin, Gyeonggi.

The minimum bid for “People...” was 4 billion won.

“The frozen atmosphere of the Korean art market amid political uncertainties was another reason,” he added.

The most expensive work sold at the K Auction sale last Wednesday was the New-York-era allover dot painting “22-X-73 #325” (1973) by Kim Whanki (1913-74), which fetched 3 billion won. Kim is behind eight of the top ten most expensive Korean modern art pieces ever auctioned.

Some 77 percent of art pieces up for auction were sold for 11.5 billion won in total.