All Starbucks in Korea to get paper straws from today

All Starbucks in Korea to get paper straws from today 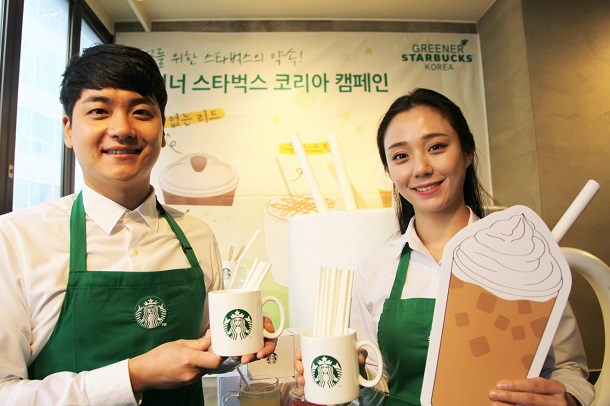 Starbucks Korea is stocking all 1,225 of its stores nationwide with paper straws in a bid to cut down on its plastic usage.

Starting Monday, Starbucks began stocking all of its stores with white paper straws, which it found during trials to be more popular than green ones. The paper straws will also be coated with soy oil both inside and outside in response to customer complaints that its original trial straws were too flimsy.

Though all stores now have paper straws, some branches will continue to offer customers plastic ones until they deplete existing stocks.

Additionally, on Monday Starbucks began stocking all of its stores with plastic cup lids that don’t require straws. These special lids, which resemble those used with hot drinks that come in paper cups, will be provided for take-out orders of regular cold drinks. Paper straws and regular lids will be provided for specialty cold drinks like Frappuccinos and drinks topped with whipped cream that are difficult to drink without straws.

“We developed the plastic cup lids to minimize disposable waste consumption and also offer an alternative to customers who prefer drinking without straws,” said a Starbucks spokesman.

Starbucks will also remove the straws and stirring sticks it previously left out for customers and instead place them behind counters and only provide them on request. It will replace all plastic stirring sticks with wooden ones as well.

“With the adoption of paper straws we will be able to prevent consumption of at least 180 million plastic straws from next year,” said a Starbucks spokesperson.