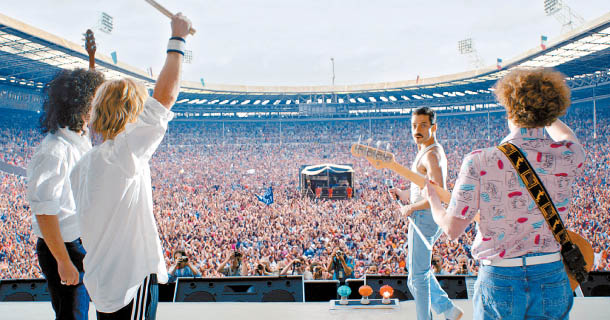 The film’s success knocked fantasy blockbuster “Fantastic Beasts: The Crimes of Grindelwald” from its week-long reign atop the box office. The film slid two spots in its second weekend.

The story about Queen’s rise and Mercury’s struggles has so far sold 4.6 million tickets, outperforming “Mamma Mia! Here We Go Again” (2.29 million tickets) to become the best-performing music movie of the year in Korea.

The film’s particularly successful weekend can be attributed to special screenings on Saturday to commemorate the Mercury’s death on Nov. 24, 1991. Cinema chain Megabox screened the movie in its MX theaters nationwide, all of which feature high-end Dolby Atmos audio.

Coming in second was actor Ma Dong-seok’s action-packed feature, “Unstoppable.” According to data provided by the Korean Film Council on Monday, the movie sold 701,000 tickets at 1,008 screens from Friday to Sunday.

The film tells the story of an angry husband (Ma) who tries to save his kidnapped wife (Song Ji-hyo) from a villain who sells off women for prostitution, and features many exciting and thrilling action scenes.

The fantasy film, written by “Harry Potter” author J.K. Rowling and directed by David Yates, is about a group of people striving to maintain the peace between the wizarding and non-wizarding world. It sold 2.2 million tickets since its arrival on Nov. 14.

Comedy drama “Intimate Strangers” came in at fourth. It sold 270,000 tickets in its fourth weekend, pushing the film’s total ticket sales to 4.9 million. 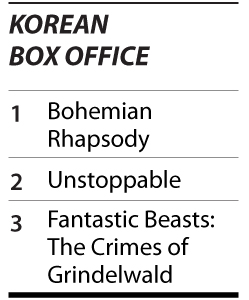 “A Dog’s Purpose,” a heartwarming adventure about a dog’s love for humans, rounded out the top five. The film, based on Bruce Cameron’s 2010 novel, was a surprise hit in China, and former member of Super Junior M Henry Lau has been cast to appear in the follow-up “A Dog’s Journey,” currently in production.

Boy group BTS’s documentary landed at sixth in its second weekend. “Burn the Stage: the Movie” is set for a global theatrical encore at 1,400 cinemas globally across 2,696 screens, according to a report by Variety.