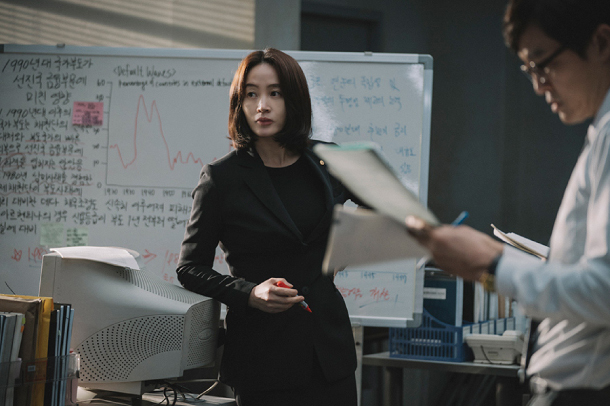 “Default” is a rare movie that directly deals with Korea’s International Monetary Fund (IMF) bailout in 1997.

Behind the scenes, however, the government and IMF’s managing director (Cassel) are negotiating a bailout package. While the vice minister of finance (Woo-jin) sees the bailout package as an opportunity to restructure the entire country, others, like Si-hyeon (Kim), a senior analyst at the Bank of Korea, warns senior government officials of the massive side effects the bailout would cause to Korea’s economy.

Outside the negotiation, the film also tells the story of Jeong-hak (Yoo), a banker-turned investment consultant who accurately predicts Korea’s economic predicament and makes a massive investment based on his prediction, and an owner of a small factory (Huh) who falls into a massive debt.

In Stockholm, a vigilante hacker named Lisbeth Slander (Claire Foy) is hired by the conscience-stricken computer programmer Frans Balder (Stephen Merchant) to retrieve Firefall. He believes that Firefall, a program he developed for the National Security Agency to access the world’s nuclear codes, is too dangerous to exist.

Lisbeth gets the program, but it then gets it stolen by mercenaries, led by a person named Jan Holster, who tries to kill Lisbeth but fails. Lisbeth goes to her ex-lover Mikael Blomkvist to help her identify her assailants. Blomkvist finds out that Holster used to work for Lisbeth’s late father, and is now connected to an elusive international crime syndicate. Lisbeth tries to alert Balder, but fails. Holster murders Balder and frames the crime on Lisbeth. This puts Lisbeth in a difficult spot to reach out to the police.

“The Girl in the Spider’s Web” is adapted from David Lagercrantz’s novel by the same name. Lagercrantz continued the “Millennium” series after the death of Swedish writer Steig Larsson, who wrote the first three in the series, including the crime novel, “The Girl with the Dragon Tattoo.”

It is directed by Federico Alvarez, who is behind the 2016 horror movie “Don’t Breathe.”

“Respect” is a music documentary that is highly anticipated by hip hop lovers in Korea. Featuring 12 popular hip-hop musicians, including Dok2, The Quiett, Beenzino and Deepflow, this title, directed by rookie filmmaker Sim Jae-hee, shows the effort these musicians have put in and the hardships they have experienced to become who they are today.

Many of the featured artists have become familiar faces following their appearances on the Mnet hip hop audition program “Show Me the Money,” which wrapped up its latest season earlier this month.

Apart from showing their performances attended by thousands, the camera also shows the artists behind-the-scenes and delves into the agony they go through in order to become better musicians. 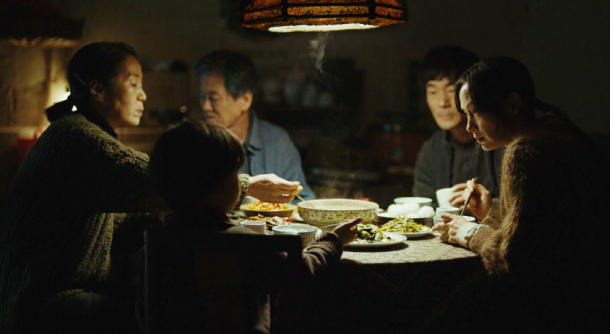 After risking her life to defect from North Korea, Lee’s unnamed character is sold off to a much older ethnic Korean living in China. There, she gives birth to her son Zhenchen (Jang Dong-yoon), but is forced to leave her family and ultimately flees to South Korea where she settles down and works as a madam at a bar.

The movie is told from the Zhenchen’s perspective, that of a young emotional man who lives with his father and grandparents in China. The film depicts his journey to uncover the reasons behind his mother’s choices. Though he starts off resenting his mother for the choices she made, he eventually learns to understand her and the life that she lives. 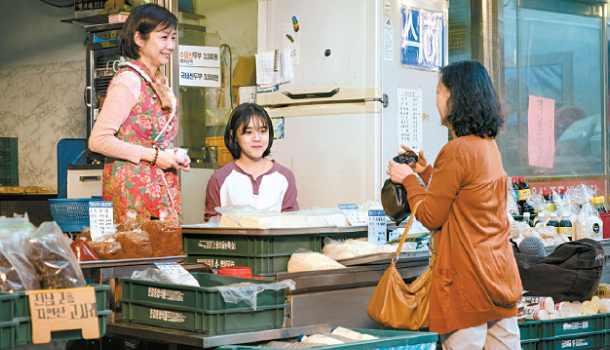 After her parents die in a car accident, Young-ju (Kim Hyang-gi) leaves school to become her family’s sole breadwinner. While working several part time jobs that pay low wages, she also takes care of her younger brother (Tang Jun-sang). Though she can barely make ends meet, she never loses her smile.

The only adults she can rely on are her aunt and uncle, who attempt to take advantage of the situation by selling the house that previously belonged to Young-ju’s parents. Young-ju’s situation deteriorates as her rebellious brother starts to cause trouble. At one point, he causes a problem that is big enough to require several million won to settle. Feeling desperate, Young-ju decides to visit the man who killed her parents.

After meeting him, however, she is unable to reveal who she really is. She instead starts to work for the man and his wife, who run a small tofu store.

Having a son in coma, the wife is instantly drawn to Young-ju and starts to treat her like a daughter. Though Young-ju initially feels uncomfortable with the relationship, she gradually opens up to the couple, despite being racked with guilt. 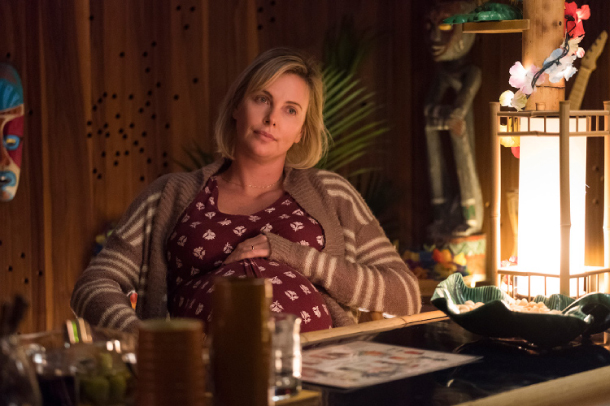 Marlo (Charlize Theron), a mother of two children, gets pregnant with an unplanned third child.

She is under a lot of stress as one of her sons has a developmental disorder that doctors have been unable to diagnose. Her husband, Drew (Ron Livingston), is not much help. Instead of taking care of the children, he often zones out and plays video games. This pushes Marlo to the limit, and she decides to hire a nanny. The new nanny is Tully (Mackenzie Davis), a young woman who shows professionalism while taking care of children.

Over time, Marlo and Tully grow very close and Marlo starts to discuss personal concerns and issues with the latter.

After the dark wizard Gellert Grindelwald (Johnny Depp) escapes from the custody of the Magical Congress of the United States of America, he attempts to build a loyal following to destroy the peace that had existed between the magical beings and ordinary people.

Korean actress Claudia Kim, or Kim Soo-hyun, who has played a number of supporting roles in Hollywood movies, including in “The Avengers: Age of Ultron,” (2015) plays the role of Nagini, a woman who transforms into Voldemort’s faithful pet serpent.

The decision to cast Kim as a character who goes on to become a slave to the franchise’s chief villain was met with controversy, after some called the choice “racist.”