5G launches tomorrow, but not on your phone

5G launches tomorrow, but not on your phone 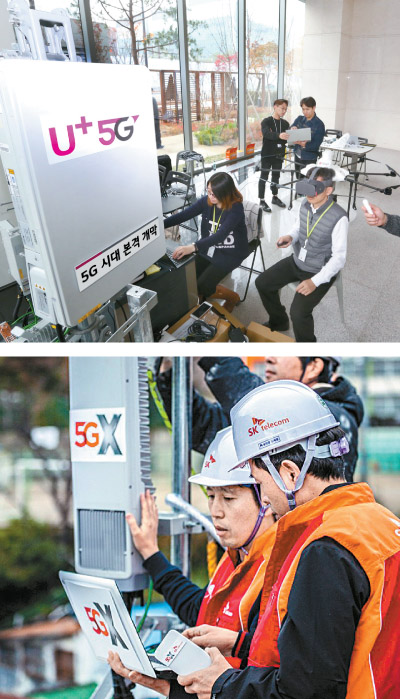 Top: LG U+ employees test 5G on virtual reality and a drone at its Magok office in western Seoul. Bottom: SK Telecom engineers install a 5G base station on Ulleung Island off the east coast of Korea on Thursday. [LG U+, SK TELECOM]

The high-speed 5G network is becoming a reality on Dec. 1.

Despite concerns about the telecommunications chaos caused by a fire that broke out at a KT facility in western Seoul, all three major carriers - SK Telecom, KT and LG U+ - reaffirmed that they are on schedule with their proposed plan to start 5G services next month.

The next-generation network, expected to be about 20 times faster than the current 4G long term evolution (LTE) network, will first be available in the greater Seoul area and six metropolitan cities including Gwangju and Daegu, before being gradually developed into a nationwide service.

The carriers will all offer mobile routers that work as Wi-Fi hotspots to be used with the 5G networks. As there are currently no commercially available devices that work on 5G, the mobile routers will convert the signal into super-fast Wi-Fi as a temporary solution until 5G-enabled phones are rolled out next spring. The mobile routers are likely to be most useful for corporate customers looking to connect multiple devices.

Myunghwa will use 5G-powered machine vision technology to bolster its product quality screening process. Once a camera takes photos of auto parts moving along an assembly line, the photos will be immediately transferred to a cloud server on the high-speed network. Artificial intelligence-based (AI) machine vision systems on the cloud server will then analyze the photos to see whether there are any defects.

For Myunghwa, SK is offering the mobile router, 5G service and AI machine vision solutions as a package. The company said it will continue to sell its enterprise-targeted 5G services in different packages based on customer needs. It did not reveal the price of the service, only saying that bills will vary by company.

The country’s smallest carrier has been working with machinery maker Doosan Infracore on remote controlling excavators with its 5G network. At a recent machinery forum held in Shanghai, China, Doosan controlled excavators in Incheon, roughly 880 kilometers (546.8 miles) away from the 5G station set up in Shanghai.

The carriers were all hoping to celebrate the launch of their 5G services at large-scale press events, but all canceled their plans after the KT fire last weekend. Instead, they have briefly unveiled their plans in press releases.

LG U+ CEO Ha Hyun-hwoi, who was expected to lead the carrier’s launch event, said in a press release that “5G is LG U+’s growth engine that will reshape our business for the upcoming decade” and emphasized that earning customer trust is key to winning in the highly-connected 5G era.

SK Telecom CEO Park Jung-ho also delivered a similar message through the company’s release, stressing that “the recent accident has shown what dangers lie beyond the bright sides of the hyperconnected society.”

KT was unable to issue a separate press release detailing what services it will offer as of press time Thursday. It only delivered a short notice saying that it is on track with 5G development. Instead, KT released an expanded compensation plan for subscribers who were affected by the recent fire.