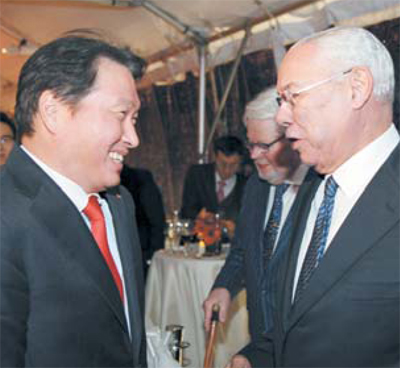 The chairman of Korea’s SK Group was in Washington on Wednesday, vowing to make a commitment not only to the U.S. market but also its people and society.

What was initially meant to be an opening ceremony was expanded under the name “SK Night” to provide a platform for Chey to explain the group’s current operations and investment plans in the United States, group officials said.

“Past years, every different SK subsidiary … opened up their branches in the East Coast and West Coast, Texas … but they never actually [had] real communication with society,” Chey said in a speech.

“Well this time, we will be investing in the U.S. about more than $7 billion here and there,” he said, citing as an example the planned construction of an electric vehicle battery plant in Jackson County, Georgia.

“That’s going to be a $1.6 billion investment, and we’re going to hire right now more than 1,400 people,” he added to applause. “But within five years and if the market allows us, then we can expand [investment to] $5 billion and hire more than 6,000 employees there.”

The plant is to be built by the group’s energy-chemical business, SK Innovation. On Monday, SK Biopharmaceuticals said it has applied to the U.S. Food and Drug Administration to win approval for sales of a newly-developed epilepsy treatment drug.

Chey has pushed to expand SK’s presence in North America this year to add to business networks in China, the Middle East and Southeast Asia. During his stay here, he met with American business partners and local subsidiaries to help expand their presence on the continent.

“[By opening up] the Washington office, I’m trying to show our commitment not only [to the] business side but also social value and commitment to society,” Chey said, adding that the group’s target is to “grow together” with U.S. society.