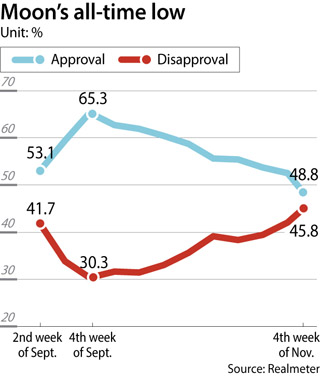 President Moon Jae-in’s approval rating dropped below 50 percent for the first time since he took office in May 2017, the latest Realmeter presidential poll showed Thursday.

Analysts blamed the decline on Korea’s stagnating economy and Moon’s preoccupation with inter-Korean relations. Denuclearization talks with the North have stalled recently.

The approval rating of the ruling Democratic Party also dipped to 37.6 percent in the same Realmeter poll, 1.6 percentage points lower than the previous survey. It also declined for the past nine weeks.

The party had an approval rating of 26.2 percent in the latest poll, 3.3 percentage points higher than the previous survey and the highest since the third week of October 2016, when it was 29.6 percent.

The poll was conducted from Nov. 19 through 21 of 1,505 adults nationwide with a margin of error of 2.5 percentage points.

In the latest poll, 45.8 percent said they were unsatisfied with Moon’s statecraft, while the remainder, 5.4 percent, said they did not know or refused to give an answer.

Moon’s highest approval rating in the second half of 2018 was in the fourth week of September, after the third inter-Korean summit, when it hit 65.3 percent. Since then, his popularity has sunk 27.5 percentage points over nine weeks.

The 50 percent of respondents who identified themselves as political moderates replied they thought negatively of Moon, more than the 46.5 percent who thought of him positively. It was the first time since the Blue House chief was elected president that more moderates were against him than moderates who weren’t. In the fourth week of September, 64.8 percent of moderates answered they were optimistic about Moon.

Kwon Soon-jung, the head of the pollster’s research and analysis department, said Moon could experience a “negative bandwagon effect,” in which people go along the general public sentiment that he’s not doing a good job, and his rating could decline further.

The ruling Democratic Party has avoided openly mentioning Korea’s sluggish economy because “economics is a psychological thing,” a Democratic Party lawmaker said Thursday on the condition of anonymity. “But I think it’s time to acknowledge that, and head into the direction of saying we’ll try to fix it.”

Bae Jong-chan, director at Research & Research, said that moderates were turning their backs on Moon because he’s been focusing too much on the North Korean nuclear issue without showing enough attention to social integration.