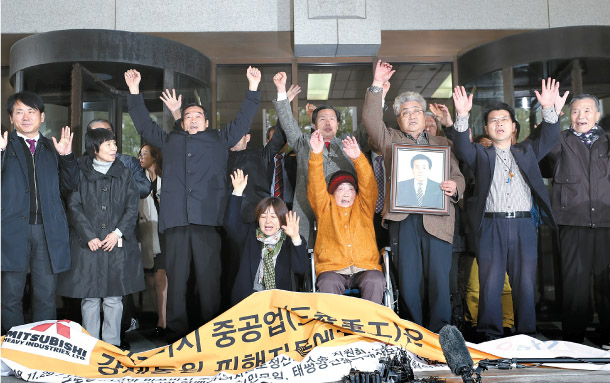 The Supreme Court ruled on two cases against Mitsubishi and upheld appellate court decisions in favor of the elderly victims of forced labor during Japan’s colonial rule over Korea, which lasted from 1910 to 1945.

In the second case, the court ordered the company to pay 80 million won to each of six victims who had been forced to work at Mitsubishi’s plants and shipyards in Hiroshima or their families. A total of 23 people are to be compensated.

“It is difficult to determine that the rights to compensation in relation to Japan’s unlawful acts going against humanity and illegal acts related to its colonial rule were included in the claims agreement,” said the court.

The ruling is in the same vein as the Supreme Court verdict one month ago that ordered Nippon Steel & Sumitomo Metal to compensate Korean victims after concluding that the individuals’ right to file claims for damages has not expired. The top court on Oct. 30 called on Nippon Steel to pay 100 million won in compensation to each of four Korean victims. That decision was immediately protested by Japan.

The ruling countered Tokyo’s claim that the 1965 treaty normalizing bilateral relations with Seoul settled all compensation matters once and for all.

In the 1965 agreement, Tokyo provided an economic cooperation fund of $500 million in economic grants and loans to the Korean government. But scholars and activists have called out the agreement for failing to address major issues such as Japan’s liability for colonial rule. These experts view it as a political deal that resolved the financial and civil debt between Korea and Japan.

On Oct. 30, the Supreme Court ruled that victims’ rights to individual compensation have not expired because the Japanese government failed to “acknowledge the illegality of its colonial rule” in the 1965 agreement.

Like it had after the Oct. 30 top court decision, Tokyo on Thursday immediately protested the Supreme Court verdict and warned that it could have repercussions on bilateral relations.

He went onto tell reporters that claims issues had been resolved “finally and irreversibly” through the 1965 bilateral agreement and that the decision “fundamentally overturns the legal basis for friendly ties between Japan and Korea.”

He called for Seoul to take “appropriate measures” and warned that Japan may have to consider other options, including international arbitration.

The Japanese Foreign Ministry also summoned Korean Ambassador to Tokyo Lee Su-hoon to lodge a protest over the court decision.

Mitsubishi Heavy Industries issued a statement calling the ruling “extremely regrettable” and a violation of the 1965 bilateral agreement.

“Following the principle of the separation of power, the executive branch has to respect the decision of the judiciary branch,” said Noh Kyu-duk, spokesman of the Korean Ministry of Foreign Affairs, addressing Tokyo’s immediate protests.

“Regardless of that, we think it is regrettable that the Japanese government continues to show an excessive response to our court’s decision, and request for restraint.”

“The overall intent of the Supreme Court decision is to underscore the need for the victims of forced labor to recover from the psychological damage that they received,” said Noh in a briefing Thursday.

“After the Oct. 30 Supreme Court decision, related government agencies have been reviewing the situation related to the ruling. We plan to come up with a response through continued discussions and gathering opinions from civilian experts.”

One of the female victims, 87-year-old Yang Geum-deok, was forced to work without pay at a military factory in Nagoya in May 1944. She was just 13 years old. She still suffers from a finger injury from her work at the factory.

Yang and others filed the damage suit against the Japanese government and Mitsubishi in March 1999 with a Nagoya district court. The Japanese top court ruled against the plaintiffs in November 2008.

And on May 24, 2012, the Korean Supreme Court made a landmark ruling that sided with the victims. It called Japan’s colonial rule unconstitutional and said that the individual’s right to claim damages had not expired.

It sent the case back to the lower courts to determine those damages.

Jeong Sang-hwa, 95, is one of six men who sued Mitsubishi since the early 1990s. He received the verdict 18 years after filing a lawsuit in Korea in 2000.