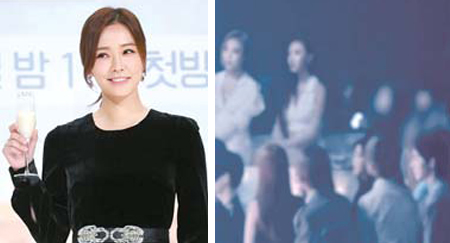 There’s nothing wrong with bringing your family to an awards ceremony - but only if you abide by the rules.

News broke late Sunday that actor Son Tae-young brought her son and niece to the 2018 Melon Music Awards ceremony on Saturday, and had them seated among celebrities, provoking harsh public backlash.

Son posted a picture of her son and niece with the group iKON backstage, writing, “I hope you had a good time.” Online users matched the children’s outfits to the videos.

“The children wanted to see Son Tae-young being awarded up-close, and had been seated by the on-site staff,” said Son’s agency H8 Entertainment on Sunday after a furor broke out. “They had no idea it was celebrity seating. They went in before the award was given [to Son] and got out as soon as she got the award.”

However, as more videos released online proved that the children were seated a lot longer than claimed by the actor, people waited for a more candid explanation.

Although Son deleted the photo of the children, people are demanded that she come forward with a proper answer. To that, Melon Music Awards issued an apology on Monday afternoon.

“We apologize to all the artists and fans who were present [at the awards] for what happened because things weren’t under control at the scene. We’ll be more careful in the future,” said the awards organizers.