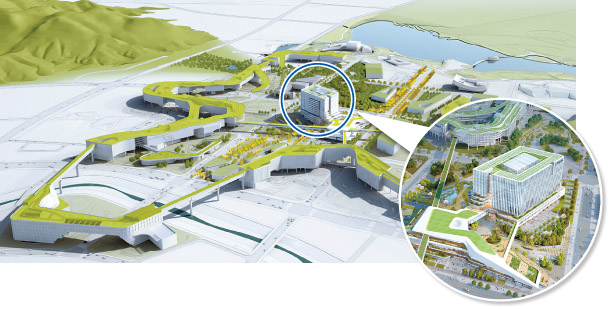 In Korea, over 120,000 structures are built every year with public funds. About 26.57 trillion won ($23.9 billion) in total is spent on this construction, according 2016 data from Statistics Korea. That equals 15.4 percent of all outlays in the sector.

These public buildings rarely turn out to be masterpieces and often become objects of ridicule. The problem is not simply about ugly designs.

Last month, the resignation of an architect as a judge for the design of Sejong’s new government building stirred public anger.

The architect, Kim In-cheurl, quit as head of the jury in protest of an “unfair judgement process” at the recent international design competition for a building to be used by the Ministry of the Interior and Safety and the Ministry of Science and ICT in Sejong’s government complex.

“It was a rigged competition,” Kim said in an interview. “On the morning of the screenings, an Interior Ministry official, who was also on the jury, told me that the ministry officials preferred a high-rise building.”

He pointed out that the request does not fit at all with the master plan for Sejong.

“The original plan was to build a ‘Flat City’ with linked buildings. Building a high-rise in the middle of the city simply means failure.”

According to Kim, a low-rise building, one of five finalists, initially received a jury majority. But in the final vote, which was split between two designs, the low-rise building lost, while a high-rise building was selected. Kim then resigned in protest. Similar controversies have been repeated with other public buildings.

The JoongAng Sunday - an affiliate of the Korea JoonAng Daily - analyzes major problems with public construction in Korea and discussed the consequences.

Poor designs to save costs

According to the 2013 Act on Enhancement of Architect Services, it is mandatory to hold design competitions for any public building whose construction costs exceed 5 billion won or whose planning costs are above 210 million won. For other public buildings that cost less than that amount, government agencies decide builders based on price. The low bidder gets the job regardless of design.

According to the Architecture & Urban Research Institute (AURI), 92.5 percent of all public buildings in 2016 were constructed for less than 5 billion won. That is, nine out of 10 buildings are developed without taking into consideration design qualities.

“We need a [governmental] organization that takes charge of the public construction designs - one like the Britain’s Commission for Architecture and the Built Environment that consists of construction experts,” says Ham In-sun, professor of architecture in Hanyang University. “We do have the National Public Building Center under AURI, but it usually ends up simply reviewing the construction plans submitted by other associations rather than planning their own project.” 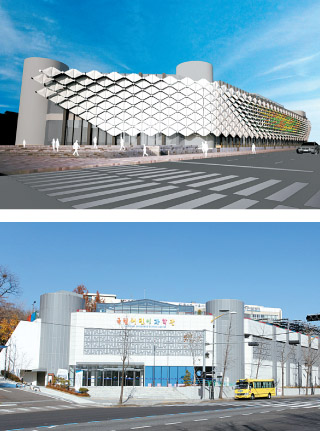 The selected design for the National Children’s Science Center, top, and the actual building, above. [SCALE]

Officials’ lack of time and expertise

The new building in the middle of the government complex in Sejong - a project led by the Ministry of the Interior and Safety and the National Agency for Administrative City Construction - is a grand project requiring 317.4 billion won of building and 13.5 billion won of planning costs.

But the project has come under fire, as people point out the lack of expertise of public officials as well as the impatience in coming up with a new design.

“[A lot of public officials] have told me to hurry up in [selecting the winners] of the international design competition,” said architect Kim.

The planning was done in a hurry - the first public hearing regarding the construction was held in March, the area for the complex was chosen from April to May, the international design competition was first announced in July and the final winners were announced on Oct. 31.

“We did not have enough time to plan or discuss the project since the competition was carried out in a rush and the construction is to begin very soon,” added Kim.

With officials trying to book achievements before the ends of their terms, the focus is on how quickly the building can be completed rather than how perfect and suitable the structures turn out to be.

“An official once tried to open up a competition for construction without imposing any limits to their designs - it meant that participants could design baroque, gothic and de-constructivist architecture,” said Yoon Seung-hyun, chairman of Korea Architects Institute.

The most controversial issue in the new building of the government complex in Sejong was the biased judgement system in its design competition - some of the judges had reportedly been selected by the hosting organizations of the competition, the ministry and the construction agency themselves.

The National Agency for Administrative City Construction denies this, stating that “the competition for the new government complex has followed strict guidelines regarding the management of the competition, and was thus carried out fairly and transparently.”

According to the guidelines, public officials from the hosting organizations are allowed to be appointed as judges, and they can comprise up to 30 percent of all the judges.

But people still criticized the process. Two out of seven judges were officials from the ministry and the agency and one of the judges was a professor recommended by the two hosting organizations.

An unfair process also leads to a suspicion of special favors. Giant architecture firms usually have sales teams that manage the lists of architects and others who are potential jury members for design competitions.

According to an anonymous architect, “If, say, the Public Procurement Service has a pool of 200 experts to select as jury members for the competitions it runs, a large architect studio lets each sales manager from its sales teams take charge of around 10 experts and privately exchanges favors, playing golf, and so on.”

According to Seok Jung-hoon, the president of Korea Institute of Registered Architects, “the specific selection processes for judges and judgment procedures must be frequently reported for more transparency.”

Public buildings often turn out to be different from the models selected for construction in the competition. Building at low cost and without the right expertise results in poorly designed buildings.

The National Children’s Science Center located in central Seoul, for instance, is totally different from the final design selected in the competition.

According to architect Hah Te-soc, the design, which was selected at the competition hosted by the Ministry of Science and ICT in 2015, featured panels on the building’s exteriors which changed colors according to the weather and one’s angle of view.

“But there were a lot of changes during the construction process,” said Hah. “The result was a totally different building - from the exterior to the interior. It looked like a warehouse.”

The original concept of the design was to teach kids the principles of science and technology in an easy and fun way.

The building was supposed to be a combination of algorithms, sensors, Internet of Things and robotics. But for public officials, the design was simply an unfamiliar construction. The high construction cost was also a major problem.

“At first, I offered alternative plans, but as time passed, they did not ask me anymore,” said Hah. “The result was the current building. I spent two years for this design - all for nothing.”