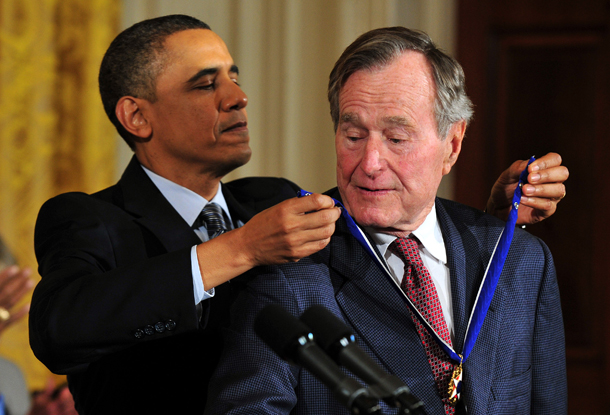 In mid-September 1987, Roh Tae-woo, then head of the Democratic Justice Party, met with U.S. Vice President George H.W. Bush at NBC in Washington. As a presidential candidate, Roh visited the United States for a meeting with President Reagan after the June 29 declaration. Bush was the likely Republican presidential candidate. Before the interview, the two candidates promised to play tennis after winning victories in their presidential elections.

President Bush, who was in office from 1989 to 1993, and Roh, who was in office from 1988 to 1993, served together during the historical transition period. Bush declared the end of the Cold War with Soviet leader Michael Gorbachev in Malta in December 1989 and led nuclear arms reduction. Roh pursued so-called “northward policy” based on the diplomatic communications he developed with the communist bloc through South Korea’s hosting of the 1988 Olympics. It was a policy aimed at opening and reforming North Korea following China and the Soviet Union. Former U.S. Ambassador to South Korea Donald Gregg recalled that President Bush facilitated a meeting between Roh and Gorbachev and made efforts to persuade China to establish diplomatic ties with South Korea, and to end its opposition of South and North Korea entering into the United Nations together. Behind the success of Roh’s northward policy that opened the doors to the Chinese and Eastern European markets was the backing and cooperation of President Bush and a solid Korea-U.S. alliance.

It was also the time when the North Korean nuclear issue began to surface. President Roh learned of Washington’s policy to withdraw its tactical nuclear weapons and preemptively declared the denuclearization of the Korean Peninsula after getting a promise from Bush to maintain a nuclear umbrella at a New York meeting in September 1991. That was a plan to discourage North Korea from having nuclear weapons by providing justification since the security situation would completely change if North Korea succeeded in developing nuclear bombs.
As North Korea was on the verge of being isolated from the international community, it agreed to join a joint declaration for denuclearization. But Pyongyang withdrew from the Nonproliferation Treaty in March 1993 over the special inspection controversy.
About three decades after his administration, President Bush passed away at age 94. When he visited Korea in March 2008, he sent a pot of orchids to Roh, who was on his sickbed, and wrote that he would not forget the happy times during which they worked together.