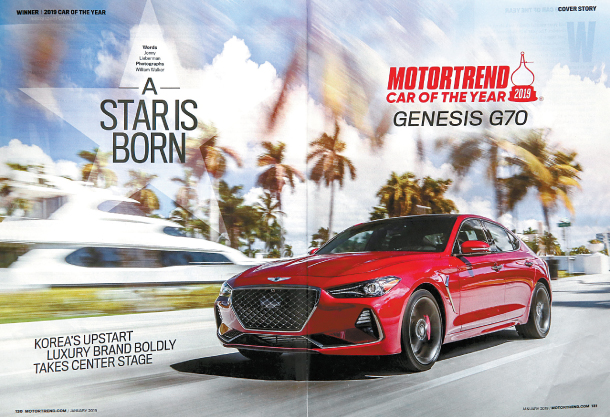 Motor Trend’s January edition names the Genesis G70 as its car of the year. [HYUNDAI MOTOR]

Hyundai Motor’s luxury Genesis G70 sedan was selected as the Car of the Year by U.S. auto magazine Motor Trend, firmly establishing it as a legitimate alternative to BMW’s long-reigning 3 Series.

The G70’s victory was proclaimed in Motor Trend’s January issue with the headline “A Star is Born.”

The vehicle competed with 20 other models including the Audi A6, Mercedes-Benz CLS and Lexus ES.

It is the first time a Korean car has won the award since the media outlet began the Car of the Year award in 1949. Last year, the winner was the Alfa Romeo Giulia, while in 2016, it was the Chevrolet Bolt EV.

The magazine praised the rapid development that Hyundai Motor has achieved in its quality and brand awareness in such a short time, pointing out that the Korean brand first entered the U.S. market in 1985 selling a “Giugiaro-designed hatchback for the low, low price of $4,995.

“Fast-forward to the present. How beyond belief is that the same cheap and cheerful automaker - Hyundai - not only has launched a luxury brand but has also built a better BMW 3 Series fighter right out the gate than the Japanese luxury brands have in numerous attempts?” the article read.

The judging panel, made up of the magazine’s editors and engineering experts from top car brands, praised the sedan’s performance, particularly when equipped with a 3.3-liter engine. Its cousin, Kia Motors’ Stinger, which shares the same platform as the G70, missed the spot last year due to its lack of a sporty suspension.

As an all-rounder, the Genesis G70 “pulls to infinity and beyond,” said Chris Theodore, a guest judge.

“The Motor Trend’s Car of the Year award is expected to have positive effect in Genesis sales,” a Hyundai Motor spokesman said.

The Genesis G70 was the first model to be released under Genesis after it was launched independently of the Hyundai brand. Other models - the G90 and G80 - were just partially revamped and renamed versions of existing models under Hyundai.

The model ranked No. 1 in this year’s J.D. Power survey in quality, pushing aside long-running luxury brands like Porsche and BMW.

The accolades didn’t translate to sales, however, as it continues to struggle in the U.S. market. The Genesis G70 sold 51 units in October in the United States.