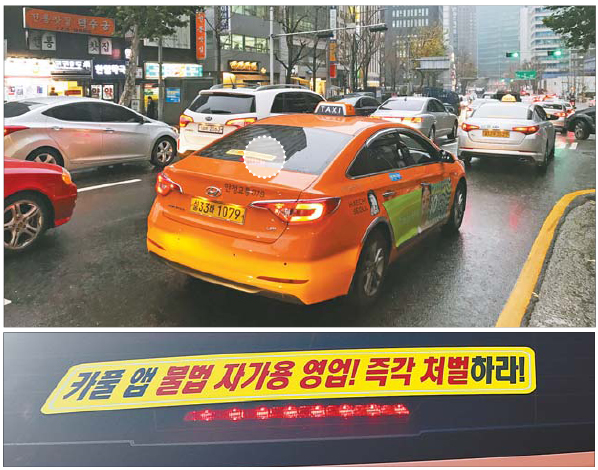 Many taxis nationwide sport signs opposing the introduction of Kakao’s carpool service, like this one on Monday in central Seoul. [SEO JI-EUN]

It may not be long before Kakao finally launches its carpooling service - possibly by the end of this month.

According to Kakao Mobility, the transportation subsidiary of KakaoTalk mobile messenger operator Kakao, the number of people who have registered to be drivers for the Kakao T carpool app has neared 60,000. The company began recruiting drivers on Oct. 16, the day it released the Kakao T app for drivers. Downloads of the app surpassed 500,000 from the Google app store and data from the Apple app store is not available.

Considering that the total number of drivers for carpool services Luxi and Poolus is 40,000, more than 50,000 carpool drivers is a lot.

Carpool drivers have a distinct app, while people who want to join a carpool merely have to press a carpooling service tab on the Kakao T app, which also offers taxi hailing services, designated driver services and a service to find parking lots.

Terms and conditions of the Kakao T app for drivers, updated on Monday, show that the base fare for customers of the carpool service will be 3,000 won ($2.70), the same as for regular taxis. The fare rises according to distance and time but the company has yet to provide details. Some have guessed that the carpool service could be 30 percent cheaper than a taxi.

Kakao Mobility has faced fierce opposition from taxi drivers, who fear the carpool service will undermine their business. Taxi drivers from around the country waged a strike on Oct. 18 and demanded last week that lawmakers make the carpool business illegal.

Kakao has gradually gotten ready to launch the service.

“We were ready to launch the moment we acquired Luxi earlier this year, but we have been in constant talks with the government [Ministry of Land, Infrastructure and Transport] as well as taxi drivers due to the sensitive nature of the issue,” said a spokeswoman for Kakao Mobility. “We are still in limbo when it comes to the pricing and launch schedule,” she said, adding that the number of driver candidates recruited so far indicates that demand for the service is high.

While Kakao has been negotiating with taxi drivers and government officials, other players in the carpool market have risen. Tada, for instance, was launched on Oct. 8 using full-size vans seating 11 or more passengers, and has been hugely popular. The company used a loophole in the passenger transport service act by using vans instead of sedans. Tada recently promised to raise the number of vehicles in operation from 300 to 1,000 by the end of the month.