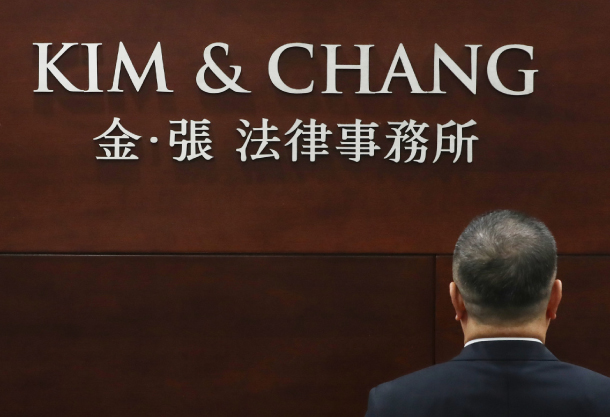 The main entrance of the offices of Kim & Chang, Korea’s largest law firm, on Monday. Prosecutors raided the offices of the firm last month over its suspected involvement in a major abuse of power scandal in the judiciary. [NEWS1]

Prosecutors last month raided the offices of Kim & Chang, Korea’s largest law firm, over its suspected involvement in a major abuse of power scandal in the judiciary, a prosecution spokesperson said on Monday.

Two of Kim & Chang’s lawyers, former Blue House legal counsel Kwak Byung-hoon and another attorney surnamed Han, have been accused of playing key roles in the collusion between the Supreme Court and the Park Geun-hye administration to delay damage suits filed by Korean plaintiffs against Japanese companies that forced them into labor during World War II.

Kwak is believed to have acted as a liaison between the Blue House and the Supreme Court, while Han, who represented the Japanese companies in the cases, allegedly met former Supreme Court Chief Justice Yang Sung-tae three times to discuss the trials last year.

A spokesperson for the Seoul Central District Prosecutors’ Office revealed on Monday that they raided the two lawyers’ offices in northern Seoul on Nov. 12. This was first time the country’s most prominent law firm was raided by the prosecution. Kim & Chang played such an instrumental role in the scandal that prosecutors now see the case as a trilateral conspiracy between the executive, judiciary and law firm, according to sources familiar with the investigation.

The firm represented Japanese companies in a handful of forced labor trials that were under judicial review from 2012 onwards. Five of these were delayed in the Supreme and High Courts starting in 2013. A number of high-profile political figures - like former Blue House senior secretary for foreign affairs Yun Byung-se - worked for Kim & Chang while it represented the Japanese companies.

Yun was appointed by Park as her Foreign Minister in March that year. Prosecutors believe he maintained the same position on the trials as the country’s chief diplomat as when he was a Kim & Chang advisor. His predecessor as foreign minister, Yu Myung-hwan, traded places with him and became a senior advisor at the law firm following the end of his term.

In 2015, Han requested an assessment report on the trial from the Foreign Ministry on behalf of Lim Jong-hun, deputy chief of the National Court Administration. The ministry is believed to have been against a ruling in favor of the Korean plaintiffs because of the potential that such a verdict could harm relations with Japan.

Han, a former judge and court researcher at the Supreme Court, allegedly communicated the Japanese companies’ positions to Yang and Lim. Prosecutors pointed to this as a serious example of judicial misconduct.

Meanwhile, Kwak, who was legal counsel to the Blue House civil affairs secretary in February 2015, conveyed the Blue House’s aversion to the trial to the Supreme Court through various meeting with Lim. This may classify as a violation of the separation of powers principle. Kwak was hired by Kim & Chang as soon as he left his job at the Blue House in May 2016.

Both Kwak and Han have been summoned for questioning by the prosecution multiple times since their involvement was uncovered by investigators in September.

The prosecution’s revelation about the raid, which emerged on the same day that they filed for the arrests of two former Supreme Court Justices, signals that investigators are ramping up their probe into the power abuse scandal. The prosecution is reportedly planning to summon the prime suspect in the case, former Chief Justice Yang, in the next few days.