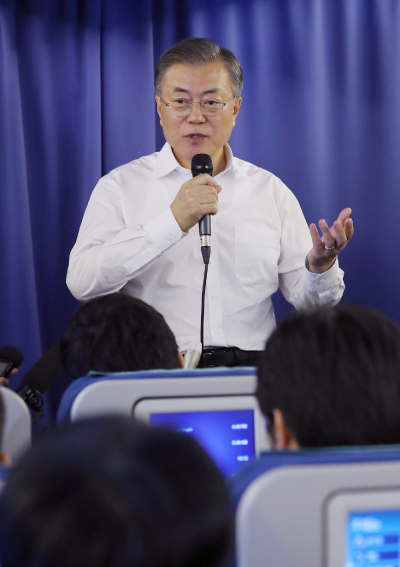 President Moon Jae-in speaks to reporters on the presidential airplane on the way to New Zealand on Sunday. [JOINT PRESS CORPS]

South Korean President Moon Jae-in told reporters that there is “still a possibility” that North Korean leader Kim Jong-un will make a trip to Seoul by the end of the year, which raises questions of whether security, logistics and an agenda can be prepared in time.

“The possibility is still open for Chairman Kim Jong-un’s visit to happen within the year,” said Moon, answering reporters’ questions aboard Air Force One en route to New Zealand Sunday following the G-20 leaders’ summit in Argentina. “Whether his visit will happen this year is a decision to be made by Chairman Kim.”

Moon said, “A North Korean leader has never visited Seoul before, thus that in itself is very significant.” Such a visit to Seoul by Kim, he added, “will carry a message of peace, his intention to denuclearize and his desire to advance inter-Korean relations.”

Thus, he said, regardless of what is discussed on a visit to Seoul, “the trip happening in itself is important.”

U.S. President Donald Trump in bilateral talks with Moon in Buenos Aires Friday endorsed a Kim visit to Seoul for a fourth inter-Korean summit with the South Korean president.

Moon said that Trump asked him to “convey a message to Chairman Kim if he makes a visit to Seoul within this year.”

Trump relayed, according to Moon, that he had “very friendly feelings toward Chairman Kim and that he liked him, which is why he hopes Kim would implement the remaining agreement, and in turn, he will make what Kim wants come true.”

Kim and Trump held a historic summit on June 12 in Singapore that produced a four-point joint agreement committing to the complete denuclearization on the Korean Peninsula in return for security guarantees for the North. Kim has since pledged to take additional measures toward denuclearization if the United States takes corresponding measures.

Moon admitted that he initially had qualms about a trip to Seoul by Kim Jong-un taking place before North-U.S. high-level talks or a second Kim-Trump summit, but added, “such concerns completely disappeared after my meeting with President Trump.”

Trump has also been reaching out to the North and said Sunday that his second summit with Kim will happen early next year with a shortlist of three possible venues.

Moon said that corresponding measures “do not necessarily have to be sanctions relief,” adding that they could include the “delay or reduction” of Seoul-Washington military exercises or humanitarian aid and nonpolitical cooperation such as sports and cultural exchange. He added, “As a political statement, we can also consider a declaration to end the Korean War,” which lasted from 1950 to 1953 and ended with an armistice agreement.

Moon brushed aside concerns that Seoul and Washington do not see eye to eye on sanctions relief and said in Seoul’s steps toward advancing inter-Korean relations, “There has been nothing that has not happened without consultation with the United States and the UN Security Council.”

On Kim’s Seoul visit, a Blue House official said Monday, “If haste is made, preparation can be completed within a week to 10 days. We are making preparations for what we can beforehand.”

A key concern for the Blue House would be security, especially ensuring the safety of North Korean leader Kim, which could bring about protest rallies in Seoul.

“The area that North Korea will pay most attention to during Chairman Kim’s Seoul visit is security and safety,” Moon said. North Korea, as a policy, doesn’t reveal the movement of its leader and takes extra measures to conceal his travels.

“Kim’s personal security team has over 100 personnel,” a Blue House official said. But it may be difficult to conceal his movements on a Seoul visit.

There is also the issue of whether Kim would address the National Assembly, a reciprocation of Moon’s address on Sept. 19 at the May Day Stadium in front of 150,000 North Koreans. In this address, Moon said that the two leaders pledged to turn the Korean Peninsula into “a land of permanent peace, free from nuclear weapons and nuclear threats.”

Along with the address, a Blue House official said that a trip by Kim to Mount Halla on Jeju Island is also under consideration to reciprocate Moon’s visit to Mount Paektu in North Korea during his Pyongyang summit. “Chairman Kim has said that he wanted to ride the KTX train, so that is being reviewed,” said the official.

In terms of the agenda, Moon has emphasized that Kim’s visit to Seoul in itself would be significant. Instead of focusing too much on the results, if it happens this year, it could serve as bridge to a second North-U.S. summit.

A Blue House official said, “We cannot demand too many things from Chairman Kim during his visit to Seoul.”