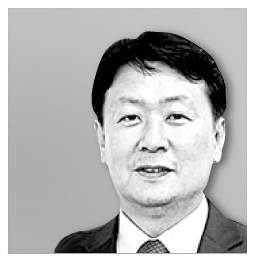 President Moon Jae-in’s controversial visit to the Czech Republic turned out to be a vain attempt. The Blue House explained that the president engaged in summit diplomacy to promote nuclear power plants in the republic on the way to Buenos Aires, Argentina, for the Group of 20 (G-20) Summit. But the president of the Czech Republic was abroad at the time. Moreover, the visit would not help win a bid for the construction of nuclear power plants in the republic.

If you dig straight down through the Earth in Seoul, you will ultimately reach the waters off of Uruguay, right beside Argentina. It would take the same amount of time to reach the other side of the Earth regardless of which way you travel given the planet’s spherical shape.

It takes over 25 hours to fly to Argentina directly. It is too far to travel in one go, so it required a stop for refueling. President Moon had to make a stop midway.

So it was a matter of choosing where to stop — anywhere that is a 10 to 14 hour flight away. The Blue House must have considered countries in Europe, the Middle East, Australia or Central America for a stopover. If the Czech Republic was chosen, there should be a clear reason.

The authorities claimed that Moon visited the Czech Republic to win a bid for a nuclear power plant project. But the explanation is not convincing. Czech President Milos Zeman was in Israel. Our Foreign Ministry said that Prime Minister Andrej Babis was in charge of government administration. Therefore, the meeting between President Moon and Prime Minister Babis was a summit. But the prime minister is appointed by the president. When Chinese President Xi Jinping visited the Czech Republic, President Zeman receives him. The president is the head of state.

The Czech government asked that the meeting remain unofficial, as it was not appropriate to have an official summit in the absence of the president. Our foreign ministry also relayed the Czech Republic’s position to the press, so our government admitted that it was not a summit. 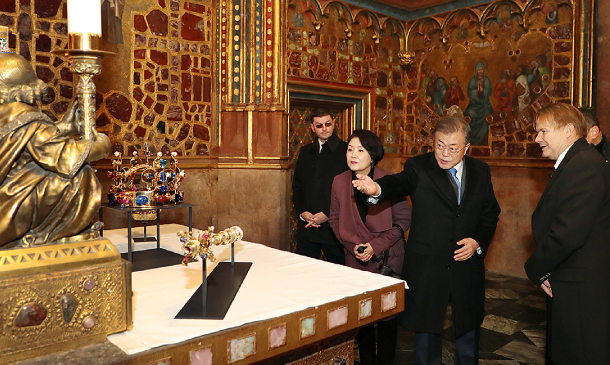 President Moon Jae-in and his wife tour the St. Vitus Cathedral in Prague, the Czech Republic, last Friday before heading to the Group of 20 summit in Argentina. [BLUE HOUSE/NEW1]

More questionable is the effectiveness of the visit. President Zeman is a well-known pro-Russia figure. It is widely known in local media that he openly backs Russian nuclear energy company Rosatom. In October, Prime Minister Babis said that the country would keep the existing nuclear plants for 10 more years. The president and the prime minister of the Czech Republic don’t seem interested in giving the nuclear power plant project to Korea.

I cannot understand why Moon visited the Czech Republic. There are many diplomatic issues all over the world. Additionally, competition for nuclear power plant bidding is taking place in Saudi Arabia, Poland and other places. Argentina’s hosting of the G-20 summit was decided at the end of 2016. I am embarrassed to see that Moon’s visit to the republic was organized so poorly when they had nearly two years to plan it.

This is not a one off. During Moon’s European tour in October, a Korea-EU joint declaration was not issued due to a difference in opinions. It is a first. On Nov. 29, a controversy arose as the United States wanted to downgrade a Korea-U.S. summit to a pull-aside meeting. The Blue House said it is also a form of official summit, but these issues could have been avoided if the diplomatic authorities had done their work more effectively.

Many former high-level diplomats say that the foreign ministry is not working very well as its morale is low due to the Moon administration’s adherence to inter-Korean issues. Things won’t go well if the Blue House handles diplomacy alone without entrusting it to experts in the field.

It only takes passion and a sense of justice for the liberal administration to punish the former corrupt administration. But the administration should realize that it calls for experience and expertise to run the economy and handle foreign policy and security affairs.