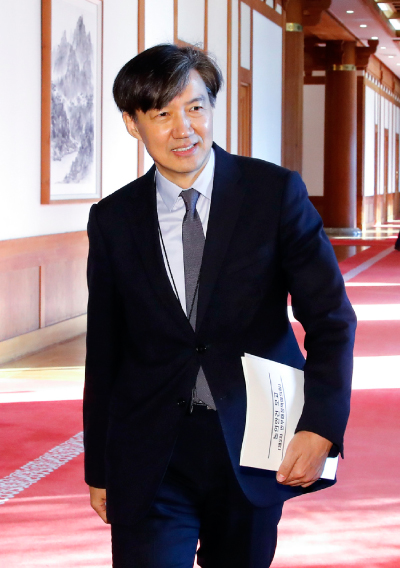 Conservative lawmakers are saying Cho Kuk should be sacked over accusations that members of a bureau he oversaw played golf during office hours and interfered in a police investigation.

Conservative lawmakers have increased their calls on the Blue House to fire Cho ever since last Friday, when the presidential office announced that all members of a special inspection bureau under Cho would be replaced with new members. The replacement of these members was a bow to media reports that accused them of ditching work to play golf when their job was to monitor corruption within organizations linked to the Blue House.

One prosecutor allegedly asked the police for details into an investigation of his acquaintance, who was facing bribery charges. He pretended the case concerned officials in the Blue House, when it actually didn’t.

The Blue House has confirmed that the prosecutor made this request, but has yet to admit whether the bureau members went golfing.

Cho only said in a written statement last Friday that the Blue House decided to entirely replace the bureau “because if some members are suspected of corrupt practices, the bureau cannot carry out its purpose.”

Moon has not made any remarks on the matter, but Blue House officials said on the condition of anonymity that Cho will probably hold onto his job for the time being because firing him right away would fuel criticism of the Blue House from the opposition. The ruling Democratic Party (DP) has fervently defended Cho, saying that opposition lawmakers are out to undermine Moon’s government.

The backlash comes at a bad time for Moon, whose approval rating has been declining for over two months. It reached an all-time low of 48.4 percent last week.

Rep. Kim Sung-tae, floor leader of the main opposition Liberty Korea Party, slammed the DP on Tuesday for its “paranoid obsession” with “protecting” Cho, saying that the senior secretary has utterly failed to impose discipline within the public service sector.

“The DP apologized on behalf [of the Blue House] for the special inspection bureau’s deviant behavior, but then, a day later, totally about-faced to say it is not a big deal,” said Rep. Ha Tae-keung of the minor conservative Bareunmirae Party. “How is this not a big deal when the entire team has been kicked out?”

The minor leftist Justice Party urged the Blue House in a statement on Tuesday to fully reveal the bureau’s misconduct, adding “those who need to take responsibility must do so,” without explicitly saying that Cho ought to be dismissed.

DP Rep. An Min-suk said during a radio interview with MBC that firing Cho might “slow down the force” of Moon’s judicial reform push. Cho holds immense authority in the initiative to remove jeokpye - or deeply-rooted evils - which Moon has vowed to eradicate from society, An pointed out. The special inspection bureau had 20 to 30 officials dispatched from the police, prosecutors’ offices, Board of Audit and Inspection and the National Tax Service. Their role was to inspect public companies and organizations that work with the Blue House to ensure they were free of corruption.

The Blue House said last week that it had no power to take disciplinary action against the dispatched officials. It said it asked their respective agencies to investigate the matter on their own to decide whether the officials were involved in any misconduct and punish them if they had.