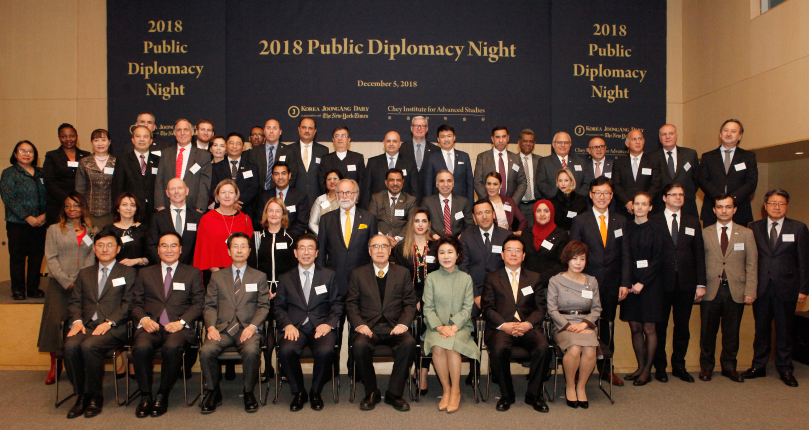 Over 100 members of the diplomatic corps, Korean government officials, the Seoul mayor and the heads of district offices, military cadets and scholars gathered in southern Seoul for the Korea JoongAng Daily’s Public Diplomacy Night to honor diplomats’ contribution to local outreach and peace on the Korean Peninsula.

Ambassadors and their spouses from nearly 40 countries attended the event, which was held for the second time this year and co-hosted by the Chey Institute for Advanced Studies.

Diplomats and their spouses from nearly 40 countries mingle at a cocktail reception at the 2018 Public Diplomacy Night at the Chey Institute for Advanced Studies on Wednesday in Gangnam District, southern Seoul.

Officials gathered at the event agreed diplomacy is increasingly being practiced by nontraditional actors.

But speakers also focused on the role of public diplomacy in bringing about a denuclearized and peaceful Korean Peninsula.

“Thanks to the PyeongChang Winter Olympic Games held earlier this year in February, the prospects for peace on the Korean Peninsula have become quite tangible,” said Seoul Mayor Park Won-soon said in his keynote address.

Park said that he met earlier this week with International Olympic Committee President Thomas Bach to discuss a joint South and North Korean bid for the 2032 Olympic Games.

“The PyeongChang Olympics Games is a starting point,” said Park. “The Olympics in 2032 will be the concluding point of peace and unification on the Korean Peninsula.

“In this time of transition, I believe that we need to focus on cities - cities are the ones that can realize peace and prosperity in the lives of the citizens,” Park also said. “City governments have more freedom when it comes to politics, compared to national governments, and they have more liberty when pursuing cooperation with other cities in the world. So in this sense, urban diplomacy is a key element in public diplomacy.”

Seoul has sister city and friendship city relations with 68 cities in 48 countries around the world.

The Korea JoongAng Daily, along with the Corps of Honorary Consuls of Korea, also awarded the Public Diplomacy Ambassador of 2018 to Michael Reiterer, the ambassador of the European Union to Korea.

He added that the diplomatic corps’ contribution to public diplomacy to enhance understanding and cooperation with the Korean people “will also contribute to the overarching goal here on the peninsula - peace through denuclearization followed by cooperation and development.”

Reiterer participates in “EU Goes to School,” a program run together by the EU Delegation in Seoul and the Seoul Metropolitan Office of Education. In the program, the ambassadors of EU countries visit local middle and high schools to communicate directly with students about the values and cultures about their representative countries.

Around 100 diplomats and dignitaries listen to speakers at the second Public Diplomacy Night. [PARK SANG-MOON]

Yoon, Korea’s deputy foreign minister, said that “Constant and continuous interaction between the government and the public is essential to diplomacy.”

He continued, “I think the next few years are crucial for fundamentally changing the landscape of the peninsula and its neighboring regions,” which cannot happen “without the support and encouragement from the international community.” Yoon said that Korea should “seize that golden opportunity to secure peace here once and for all.”


Ambassadors and spouses attending the event in alphabetical order of the home country: