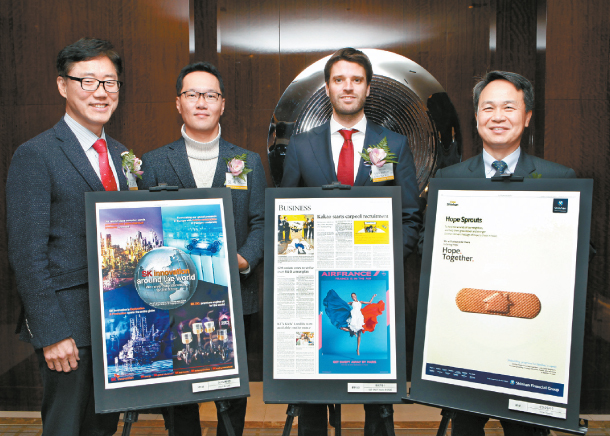 In its 54th year, the JoongAng Advertising Awards selects the best print ads published in the Korea JoongAng Daily, JoongAng Ilbo and JoongAng Sunday. The results are based on assessments from a group of judges and a reader survey.

This year, 15,021 readers participated in the online survey.

A total of 25 awards were given by the three publications. The Korea JoongAng Daily selected three English-language print ads. SK Innovation was awarded the grand prize, while Air France went home with the platinum prize and the Shinhan Financial Group won the gold.

Its “around the world” print ad showed images of SK conducting business in different countries, including a project to build a car battery factory in Hungary. The concept aligned with the company’s “Deep Change 2.0” initiative to diversify from oil refining.

“This year, we used art based on virtual-reality technology in presenting our global businesses,” said Lim Su-kil, SK Innovation’s executive vice president in charge of the public relations office. “We thought this method of creativity is somewhat familiar to the public but still can attract attention when used for art.”

The print ad was drawn with Google’s tilt brush, a tool to draw and paint on a canvas projected through virtual reality headsets.

The platinum prize went to the Air France’s “Get Swept Away by Paris” ad. In the ad, a model jumps in a dress colored like the French national flag.

“This particular ad reflects values like elegance, stability, confidence and our pride as a French company - these are all part of the DNA for Air France,” explained Chris van Erp, the company’s commercial director for Korea, Japan and New Caledonia.

Shinhan Financial Group was awarded the gold prize. The “Hope Together” ad was part of a corporate social responsibility campaign in which the company organized a wide range of programs to support families facing difficulties, from offering donations to job training.

“The Band-Aid on the center signifies our initiative to help families in crisis,” said Jin Ok-dong, the deputy president of Shinhan Financial Group.