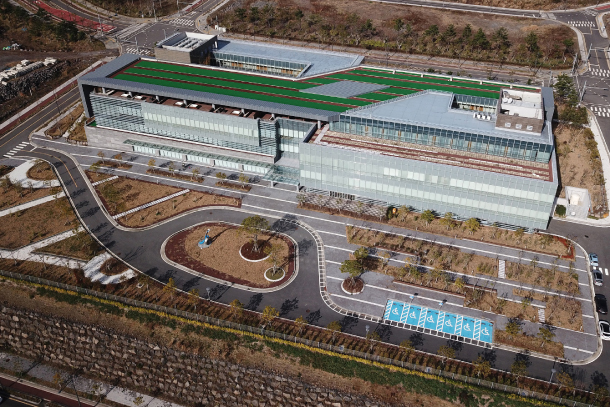 The governor of Jeju announced on Wednesday that he will allow a Chinese company to open Korea’s first for-profit hospital in Seogwipo. The decision immediately prompted backlash from local protestors. [NEWS1]

Won gave the green light to Greenland Group, one of China’s largest real estate developers, over a year after the Chinese company completed construction work for the Greenland International Hospital in Seogwipo, Jeju Island, in July 2017. The Shanghai-based Greenland Group has since been waiting for final approval for operation from the Jeju government, which delayed making the call due to fierce opposition from local civic groups.

Greenland’s decision to go ahead with construction plans for Greenland International Hospital was based off of permission granted by Korea’s Ministry of Health and Welfare in December 2015, during the conservative administration of former President Park Geun-hye. Greenland started building the hospital in April 2016.

Jeju officials said Wednesday that the province had no other choice but to allow Greenland to operate on Jeju because failing to do so could “severely” damage the province’s international credit rating. Won said the for-profit hospital will only be allowed to provide medical services to foreign visitors to Jeju in its four departments: plastic surgery, dermatology, internal medicine and family medicine.

The Jeju governor apologized for ignoring conclusions by a committee of experts who formally recommended that the island turn down the Chinese company.

“Please understand that I’ve made an inevitable choice for the future of Jeju after a long period of consideration,” Won said Wednesday.

The Jeju government explained that Greenland International Hospital will not affect Korea’s medical system because Korean nationals will not be allowed to receive services there.

After Greenland finished building the international hospital in July 2017, it hired 134 medical workers and waited for the Jeju government to allow the hospital to start operating. The Chinese company has claimed that the delay caused 850 million won ($763,000) in damages every month. If Won had postponed making a decision any further, Jeju officials claimed that Greenland could have taken the case to court for compensation.

A confederation of around 30 groups in Jeju opposed to the commercialization of medical services said in a joint statement on Wednesday that Won would not have allowed the Chinese company to open a hospital in Jeju had he respected the expert committee’s opinion. The confederation added that they were “dubious” of Won’s reasoning behind his decision to grant approval to the Chinese company nevertheless.