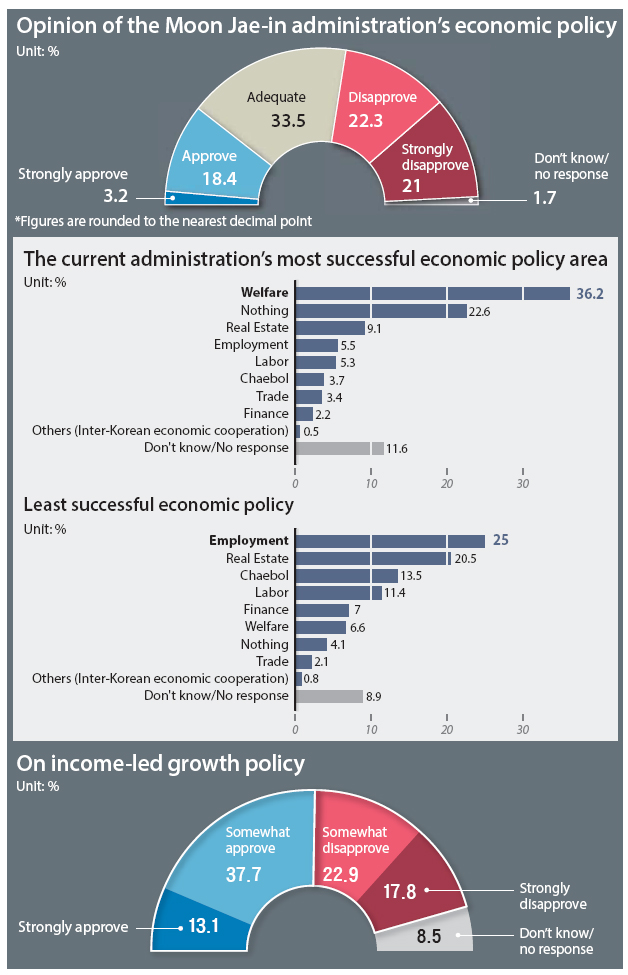 More than 40 percent of respondents to a JoongAng Ilbo survey said that they disapproved of the Moon Jae-in administration’s economic policies amid increasing concerns on the state of the country’s economy.

The economic awareness survey, conducted by the JoongAng Ilbo’s research team, asked 1,000 adults across the country about their opinion of the current economic situation and policies of the Moon administration. The survey was conducted between Nov. 26 and 27.

The survey largely resulted in a negative outlook, with the majority of respondents - 52.6 percent - expressing disapproval of the minimum wage hike, the flagship policy under the current administration’s push for income-led growth.

When asked about the overall performance of the Moon administration’s economic policy, nearly 22 percent said they approved, of which 3.2 percent strongly approved. Meanwhile, 21 percent of respondents strongly disapproved, with a total of 43.3 percent disapproving of the current government’s economic direction.

A third of the respondents - 33.5 percent - said the administration’s economic policies were “adequate.”

The sizeable disapproval figure appears to indicate that the government is not responding appropriately to the changing situation as economic growth slows. The state-run Korea Development Institute recently revised Korea’s gross domestic product growth figure for this year from 2.9 percent to 2.7 percent.

As for the biggest problem that Korea’s economy faces, 29.3 percent of respondents said the job situation, followed by the worsening gap between the rich and the poor at 16.6 percent, worsening political instability at 12 percent and a rise in wages at 9.4 percent.

On the Moon administration’s income-led growth policy, approval fell and disapproval rose compared to the result of another survey in September. The earlier approval figure of 56.1 percent fell to 50.8 percent in the most recent survey, while the disapproval rating, which was at 38.5 percent previously, rose to 40.7 percent. While the majority still approves of the general concept, its leading policy, the minimum wage hike, was met with disapproval from 52.6 percent of respondents.

“[People] approve of the general and abstract idea of income-led growth but there is a lot of critical perspective on the specific policies to realize it,” said Kim Tae-gi, a professor of economics at Dankook University. “In terms of economic policy, we need to control the pace and a change in direction.”

Respondents were also critical of policies surrounding employment and real estate, which the administration had promised to focus on.

When asked which economic policies were the biggest failures, employment topped the list at 25 percent.

Over 20 percent of respondents chose the employment issue due to the worsening job situation. The unemployment rate in October climbed 0.3 percentage points from last year to 3.5 percent, the highest for any October since 2005, according to Statistics Korea.

Real estate came in at second, picked by 20.5 percent of respondents. The rise in housing prices in Seoul this year despite the government’s pledge to cool down the market likely caused the disapproval. At the same time, the government’s loan restrictions to slow down the market may have also contributed to the disapproval as 27.1 percent of those in their 30s - the age group that tends to have the most people looking to buy their first house - chose real estate as the biggest failure, higher than the 26.3 percent of the age group that chose employment.

On the most successful economic policies by the government, 36.2 percent of respondents chose welfare, followed by “nothing” at 22.6 percent, reflecting the difficulty faced by respondents in pinpointing an economic policy that they consider a success.

“Economic policies have to consider the overall impact on all economic participants, but the current government’s policy has largely had a tendency to target specific classes,” said Yun Chang-hyun, a professor of business at the University of Seoul. “Unlike the policy’s original intent, other factors had a negative impact on many groups and such a result seems to be reflected on the survey.”

“The sharp rise in the minimum wage had a positive impact on some disadvantaged groups, however, it hurt business owners,” added Yun.

Respondents’ outlooks on the economy - both now and in the near future - were also dim.

When asked about the current state of the economy, 70 percent of respondents said it is “difficult,” a 6.7 percentage point increase from September.

Responses that had a positive outlook on the current economy were at 5.5 percent, a 4.1 percentage point decrease from the previous survey.

Respondents didn’t have high hopes for next year either, with nearly half saying the economic situation will worsen next year, compared to the 17.5 percent who said that it will improve. One third, or 30.7 percent, of respondents said it will stay much the same.

“As the economy continues to be in a slump, a stall in housing prices and the depressed stock market have had an impact,” explained Kim Dong-won, a visiting professor of economics at Korea University. “As exports are expected to be sluggish, it will be difficult for the sentiment to improve.”