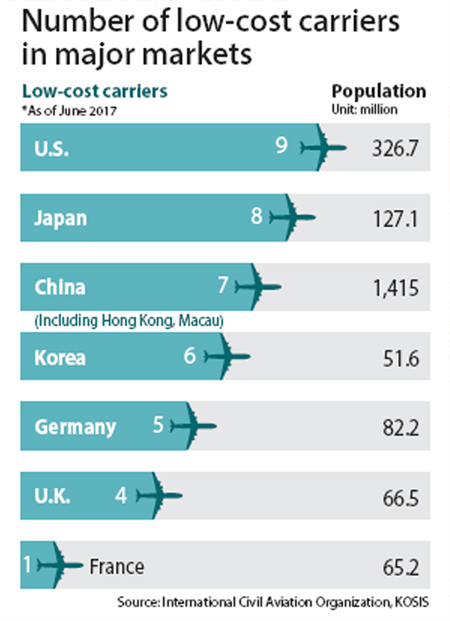 The local airline industry has been focusing recently on whether the government will hand out licenses for new carriers early next year as the market is already well served and possibly crowded.

The Ministry of Land, Infrastructure and Transport has received applications from a total of five airlines, with four of them, Aero K, Fly Gangwon, Air Premia and Air Philip, looking to carry passengers and one, Guardians Airline, seeking a cargo license.

The Transport Ministry is considering the applications based on various criteria, including safety, financial condition and benefit to consumers, among others. It reviews the applications along with the Korea Transport Institute (KOTI), a government transportation research agency. Once the process is completed, an advisory meeting, which includes industry experts, will gather to discuss the final decision on licensing.

The licenses will be conditional. After receiving business licenses, the airlines need an Air Operator Certificate. They must also be granted an airline route right and have flights commissioned within two years. If the airline is unable to meet this timeline, the license will be revoked.

Under the current plan, the licenses will likely be issued by March 2019.

The airline industry and experts are divided over the government’s plan to issue new licenses. The new licenses are especially controversial in the passenger airline community as existing carriers view the market as already crowded. They also see the outlook as gloomy.

“It is true that in the recent three to four years, the airline market, especially for LCCs, grew rapidly. But since last September, demand has started to fall. With the outlook for a slowing economy next year, we can expect more difficulties,” the official noted.

For local LCCs, domestic flyers account for around 90 percent of passengers. If the Korean economy weakens, the airlines lack much of a hedge against the sluggishness.

“Even major countries that have a larger population than us don’t have a large number of LCCs. If competition increases, profits will fall and airlines will fail, consequentially leading to losses for consumers,” another senior LCC official said.

Concerns also center around the short supply of pilots and maintenance workers.

According to KOTI’s report on pilot manpower supply, the number of captains needed over the next 10 years is 300 a year. The market also needs 400 copilots every year. The number of pilots entering the market, especially those with captain-level experience, is severely lacking. A significant number are leaving to work in foreign markets, such as China. Last year, 145 pilots transferred for employment at carriers in other countries.

The low number of experienced maintenance workers also poses a problem. Given the shortages, existing airlines are worried that new airlines may poach their pilots and workforce.

Airlines applying for licenses see the competition as being good for the industry overall, leading to better prices and services, and ultimately, to increased consumer satisfaction.

“They should be handing out licenses if [new airlines] pass a certain standard. They should not limit the choices available to consumers,” said one official at a new airline company.

The lack of workers can be solved by partnerships with foreign companies, limiting damage to existing carriers, some observers suggest.

A recent report by KOTI forecasts 20-percent passenger growth in the LCC market on international routes. Consumer complaints that LCCs aren’t as cheap as expected may be resolved if further competition is introduced.

“We need competition, but we need to select airlines that can properly do their jobs by having strict licensing standards,” said Lee Kang-seok, a professor at Hanseo University, which specializes in training pilots.

“Safety is a given, and there needs to be a stringent review of whether they are well prepared,” added Lee.

Others place more faith in the market.

“If there is no concern about safety and insolvency, the government should leave it to the market rather than control it,” said Kim Byung-jong, a professor at Korea Aerospace University.

A state-sponsored research institute official who requested anonymity called for judging applications based on market conditions: “In the license review process, we need to make a strict call on whether there is room for more airlines.”