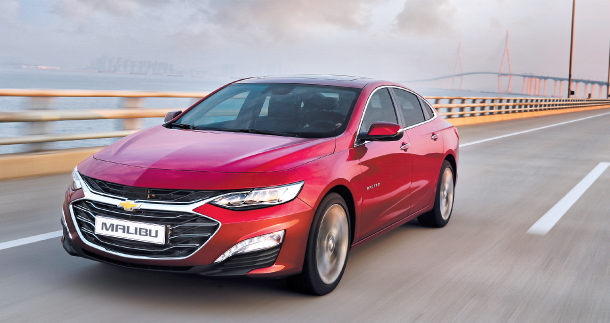 INJE COUNTY, Gangwon - GM Korea is looking to capture young drivers with an update to its best-selling Chevrolet Malibu, promising lower prices and better fuel economy, but at the cost of a smaller engine.

The Korea JoongAng Daily got behind the wheels of the updated Malibu on the Inje Speedium racing circuit in Gangwon and a partial 50-kilometer (31-mile) course from Gangwon to Seoul on Nov. 26.

Despite what GM Korea calls “rightsizing” measure - a decrease in engine size - the new Malibu shined on the track as it kept to its predecessor’s strengths of a hard lower body and stable steering.

The vehicle held steady when accelerating and, even with mistimed braking on sharp corners of the Inje Speedium, the Malibu recovered immediately, reacting quickly to sudden braking and steering.

The entry-level model also adds faster acceleration despite the smaller engine as the carmaker demonstrated the speed difference with its predecessor on a drag race. The new Malibu crossed the finish line visibly earlier than the former 1.5-liter model.

The new engine appears to cut costs to balance performance and efficiency as the company reported a bumped up combined fuel economy of up to 14.2 kilometers per liter (33.4 miles per gallon).

Those who value power over fuel efficiency, however, will prefer the familiar 2.0-liter turbocharged engine model.

Compared to the smaller engine, the 2.0-liter model showed significantly more power. During the drive from Gangwon, the 2.0-liter Malibu accelerated to 100 kilometers per hour (62.1 miles per hour) in an instant, speeding past the occasional military convoy on the mostly empty countryside roads.

On the highway, the vehicle also remained relatively steady, even at speeds of 150 kilometers per hour, excelling at blocking out road and tire noise to give confidence to the driver and provide a comfortable ride.

While lacking a seamless finish, the cream beige interior in the model for the drive back to Seoul added to the driving comfort as the vehicle provided spacious room.

The sedan also provides safety features such as being equipped with 10 airbags, a first for its class in the country, in addition to other smart features including front collision warning and lane keep assist.

The latter feature, however, was noticeably lacking compared to offerings from other carmakers. Drivers won’t be able to place complete faith in the lane keeping system as it only seemed to kick in when the car was clearly about to cross over into the next lane.

For fuel-conscious drivers, GM Korea is also offering another new 1.6-liter diesel engine model that has a combined fuel economy of up to 15.3 kilometers per liter.

While largely recognized as a family sedan, the Malibu’s new price will likely draw a younger crowd as the entry model starts at 23.45 million won ($21,000), lower than the predecessor’s cost of 23.88 million won. The price, however, comes with a decrease in engine size to the 1.35-liter E-Turbo engine from a 1.5-liter engine.

Despite the all-out effort to offer performance and efficiency, whether the Malibu will overcome the company’s management woes is difficult to tell.

GM Korea sold only 15,235 Malibus in the domestic market in the first 11 months of this year, a 50.3 percent decrease from the 30,673 models sold last year over the same period.

“It’s definitely been a challenging year,” admitted GM Korea CEO Kaher Kazem at a media event at the Inje Speedium. “We will continue to grow. Our plan is to launch 15 either new or refreshed models over the next five years.”