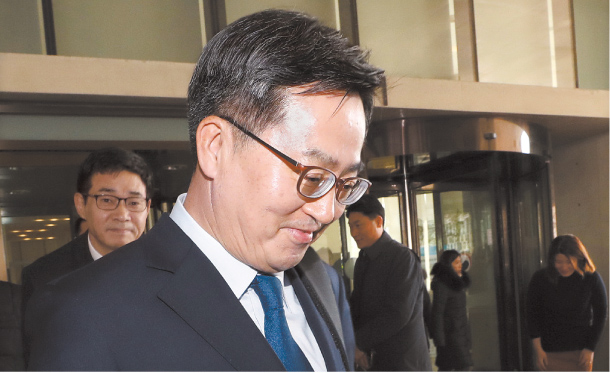 Kim Dong-yeon, the outgoing deputy prime minister of economics and finance minister, said he wishes that he had done better when it came to jobs and wealth distribution.

“I considered myself the evangelist of innovative growth,” Kim said on Monday during his last press conference as finance minister. “It was most rewarding.”

Kim ended his role as the nation’s top economic policymaker, a position he has served in for a year and a half. His retirement took place after the National Assembly over the weekend finally passed next year’s budget, almost a week after its legal deadline on Dec. 2.

“In the case of external factors, if things go wrong the impact is huge, but when it goes right, everything goes along as if nothing really happened,” Kim said. “I think we did well on the currency swap with Canada, the revision of the Korea-U.S. free trade agreement and the foreign exchange negotiation with the United States.”

He also said that through ministerial meetings, the economic team was able to finish up the restructuring of industries that were not executed cleanly under the previous administration.

“I can say with pride that we have finished [the restructuring] before it became a bigger problem,” Kim said.

However, his biggest regret during his term was failing to meet expectations on jobs and wealth distribution.

“Since the second half of this year it felt as though I was living with a lump of coal on my chest,” Kim said. “It particularly hit hard as I met many students who were studying to get a job when I was the president of a university before becoming deputy prime minister.”

He said he did his best to solve the wealth distribution problem, which didn’t meet his expectations.

However, Kim refrained from giving further advice to his successor, saying it was not his position to discuss publicly which direction policy should be taken.

“As the first economic team [of the Moon Jae-in administration], we have put a lot of effort on paradigm shifts,” Kim said. “And in the process there were inevitably different opinions.”

“Because we have somewhat completed the paradigm shift, with this foundation I am confident that Hong Nam-ki [the succeeding] deputy prime minister will push forward in realizing the [Moon government’s economic] policies.”

He gave some advice, including the importance of a grand compromise from each and every member of society in order to break structural problems.

“In every problem, whether it’s economic or social, there are a lot of structural issues,” Kim said. “It’s a complicated problem especially as there’s already an existing frame with interest groups intertwined.”

“And thus a grand comprise is needed, not only by politicians at the National Assembly, but by every member of society.”

To his former employees in the government, Kim said they should have the courage to come up with policies that share out pain, even if they are unpopular.

Kim’s successor Hong was officially appointed as deputy prime minister of economics and finance minister by President Moon at the Blue House on Monday. He will start his job with an inauguration at the Finance Ministry today.