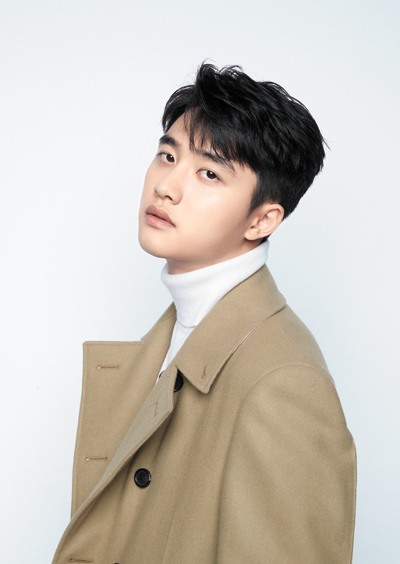 D.O. from popular boy band Exo, may have risen to fame as a singer, but over the past few years the 25-year-old has also risen to prominence as an actor.

Using his full name Do Kyung-soo, his first role was in the 2014 hit SBS drama “It’s Okay, That’s Love.” Do has gradually built his career and has been recognized for his roles on both the silver screen and in television.

His first major cinematic role was in 2015’s “Unforgettable” and he has taken on bigger roles since. He has been praised for his performance as a soldier in the fantasy blockbuster “Along With the Gods” franchise, in the 2016 comedy flick “My Annoying Brother,” where he played a blind young man struggling to live under the same roof with his irresponsible brother, and the black comedy “Room No. 7” (2017), in which he starred as a poverty-stricken part-time worker who accidentally gets involved in a crime.

Next week, Do returns to the big screen in the dance movie, “Swing Kids.”

Directed by Kang Hyung-chul - who was behind such comedy flicks as “Sunny” (2011) and “Speed Scandal” (2008) - “Swing Kids” is set in 1951 during the Korean War (1950-53), and revolves around a rebellious North Korean soldier named Ro Gi-soo (Do) who falls in love with tap dancing after seeing Jackson (Jared Grimes), an American officer and Broadway performer, dance.

Gi-soo then joins Jackson’s dance group, which is made up of prisoners of war from the American-controlled camp located on Geoje, South Gyeongsang, and a translator named Yang Pan-rae (Park Hye-soo).

Though Gi-soo spends the entire day either practicing or getting into the rhythm of tap dancing, he struggles to speak about his newfound passion with others, as tap dancing is seen by his fellow soldiers as representing the U.S. ideologies of democracy and freedom.

The 133-minute film is filled with splendid dance scenes, which was no easy task even for a pop star like Do. But he could not let the movie pass through his hands because he loved the tale of “five young people sharing a passion for dance despite the dire situation.”

“I instantly fell in love with the script of ‘Swing Kids,’” said Do during an interview held in central Seoul on Tuesday. “Gi-soo and I are very similar in a way that we both have bright personalities. Also, there is a scene in the movie that shows how excited Gi-soo feels about tap dance when he is first learning it. I felt the same in real life when I got to learn tap dance [for the movie]. I couldn’t let go of that rhythm. It was stuck in my head.”

Being his biggest role to date, Do felt a lot of pressure to do well. He concentrated on expressing Gi-soo’s emotions and showing the reasons why he has these feelings in detail.

“Gi-soo is a troublemaker, and is like a ring leader that others follow. To help the audience sympathize with him, I put in a lot of effort to understand him and his feelings.” While researching the role, Do referred to old photographs taken by war correspondents.

When the film was announced, fans were excited to see Do tap dance, as he has already shown off his dancing skills as a member of Exo. Even Do himself did not think tap dancing would be too hard, but it turned out to be much more of a challenge than he expected.

“I thought it would be less difficult because I am used to dancing.” Do added, “But I soon realized how different tap dancing is to the [pop] choreography I usually dance.” It took him five months to dance at the level he does in the film.

For a person who is active as both a singer and an actor, figuring out which part of his career to pursue is not a major concern for Do.

“I’m not sure whether this is possible, but I try my best to do my best in every field I try. I don’t know how long this would be able to last, but I’m trying my best.”

“Swing Kids,” rated 12 and above, hits theaters on Wednesday.