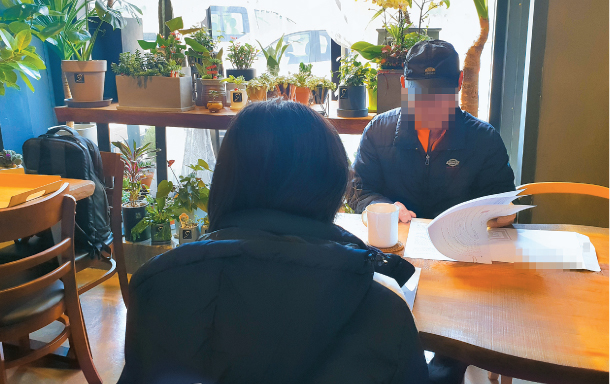 An 18-year-old girl from a multiethnic family, along with her father, talks to a JoongAng Ilbo reporter. [PARK JIN-HO]

For one half-Filipino, half-Korean student, the bullying began when her classmates first threw her shoes far away and asked her to fetch them.

Years later, they started taking her to an empty classroom and stripping her of her school uniform. Once she was naked, they scribbled over her body with markers or beat her.

Her story is not unique. Over 3,000 students from multiethnic families in Korea say they’ve been bullied.

“Come every lunch time, or cleaning hour after classes ended, they would take me to a separate classroom and strip me of my clothes and hit me,” the 18-year-old student surnamed Lee, who attends high school in Gangwon, told the JoongAng Ilbo. “Sometimes they drew on my body with markers and hid my clothes from me so that I would have to go look for them and be late for class. I tried to fight them back, but I couldn’t because they always outnumbered me.”

The bullying would continue after classes, she said.

“After school, I had to pay for whatever food they wanted to eat,” she said. “So I started working part-time at a pizza place. More than once, I thought that all of this could end if I my life ended.”

Lee said she has been harassed by classmates since she was in eighth grade. She tried to tell her parents and the teachers about it, but gave up on the idea due to fear.

“I went into my teacher’s office to ask for help, but I saw those kids hanging about the office area,” she said. “So I gave up on the idea. I tried to ask others around me for help, but I was scared.”

She finally gathered the courage to tell her parents about the bullying this year. The police began investigating her case from October.

The Ministry of Gender Equality and Family announced in 2016 that 5 percent, or 3,090, of 61,812 students of multiethnic backgrounds in Korea aged between seven and 24 experienced bullying and abuse at school, according to a survey they conducted.

The number may be higher today, as the Ministry of Education put out its count on the number of students from multiethnic families aged between seven and 18 to be 122,212 this year. This number was a huge jump from 46,954 students in 2012.

Much of the bullying is related to the outward appearance of students from multiethnic backgrounds.

“They called me names like Choco Pie [a chocolate-covered Korean snack] and a [racial epithet] because of my skin color,” said an 18-year-old boy whose father is from Pakistan. “I was bullied from fifth grade. From 9 a.m. to 2 p.m., all I heard from classmates at school was abusive words and expletives.”

Several students from multiethnic backgrounds have been bullied to the point of physical injury or death in recent years.

A 12-year-old boy surnamed Park, whose mother is from Vietnam, was bullied at a school camp in Suwon, Gyeonggi, in July 2017. A fellow student sharpened the end of a wooden toy arrow with a knife and shot it at Park’s face, and Park lost his left eye as a result. The student who shot the arrow was expelled and moved to a different school.

In November this year, a 14-year-old boy, whose mother is Russian, was allegedly running from bullies on the rooftop of a 15-story building when he fell from it and died. Authorities are investigating the case.

But the survey by the Ministry of Gender Equality and Family showed that 36.1 percent of the students who were bullied did not seek outside help. Sometimes, parents find out too late about the bullying because they cannot spend enough time with their kids.

“Both my husband and I have to be at work all day,” said a 40-year-old woman surnamed Kim from Vietnam who became a naturalized citizen of Korea years ago. “I cannot speak Korean well, and there were many times that I did not understand the notices and information from my child’s school.”

Due to bullying and other reasons, many multiethnic students give up on schooling altogether. The Ministry of Education said that the number of students with multiethnic backgrounds who stopped attending schools rose from 572 in 2013 to 1,278 last year.

“Schools need to create an ecosystem where these students can talk to their teachers about bullying and other issues,” said Seol Dong-hoon, a sociology professor at Chonbuk National University in North Jeolla.

Some experts said that Korean society must stop labeling the students as multiethnic in the first place.

“We need to teach them from when they are young that they are Koreans,” said Jeong Ji-yoon, a professor of international relations and business at Myongji University in western Seoul. “Many of these students know how to speak two to three languages and are extremely talented people who can propel this society forward.”

“I used to think that having more students with multiethnic backgrounds in the school might prove problematic,” said Kim Young-mi, a teacher at Hapseong Elementary School in Gimhae, South Gyeongsang, where 26.5 percent of the students have parents from outside of Korea. “But after spending years teaching the students, I realized that they can bring the country forward in a more globalized world.”

“I used to be bullied at school and didn’t have much confidence,” said Park Bo-seong, a 17-year-old student of the school. His mother is from the Philippines.

“But [after] coming to this school, I started my own YouTube channel,” he said. “It has given me new dreams. I hope people will see that children of multiethnic families are still Koreans.”

The school graduated 44 students last year, each of whom had at least one certification in technology, programming, electronics and other fields.

Park Han-sang is one of them. He graduated with eight certifications. He started working at the Seoul Facilities Corporation on Nov. 27 and is the first graduate of the school to work at a public corporation.

“Students come to our school feeling rejected from society and with low self-esteem,” said Byun Gyung-hwan, a teacher at the school. “But once they are here, they meet students whose parents are also from overseas and they bond over the experience. They become more confident day by day. The bullying of these students at schools will stop once their multiethnic identities become accepted as a norm.”

“There are only five schools throughout the country that focus on educating students from multiethnic families,” said Kwon Dae-ju, principal of the school. “There should be at least one per metropolitan city.”