Connecting lives separated by war: Novel draws on experience and history as it examines the personal cost of conflict

Connecting lives separated by war: Novel draws on experience and history as it examines the personal cost of conflict 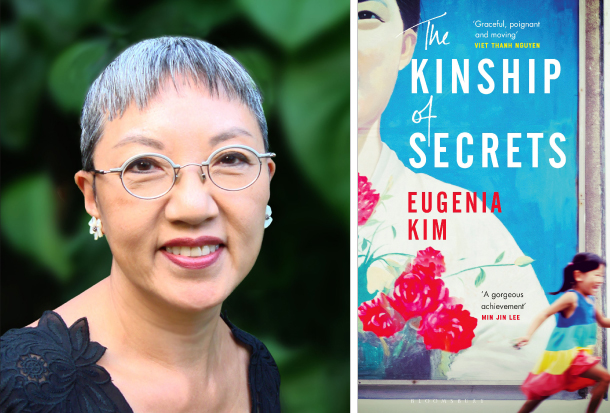 Korean-American author Eugenia Kim, left, who wrote the recently-published period novel, “The Kinship of Secrets,” her second after “The Calligrapher’s Daughter,” published in 2009. [BLOOMSBURY]

The Korean War (1950-53), which ripped the country apart, is one of the most tragic events on the peninsula. Though the broad history of the conflict is well known to many, both inside and outside of Korea, less is known about the actual struggles of and the pain endured by people living during that era.

Korean-American author Eugenia Kim’s latest novel, “The Kinship of Secrets,” examines the grief and challenges of a family torn apart by the war and the coming-of-age experiences of some of its members.

A second novel from the author of “The Calligrapher’s Daughter,” which depicts 30 years of Korea’s modern history, “The Kinship of Secrets” is about a family and the secrets it had to keep and the sacrifices that were made in order to survive the war-torn time and the years following.

Inspired by personal experiences, the novel centers on a married couple — Calvin and Najin Cho — who brought one daughter (Miran) to the United States in 1948 while leaving their infant daughter (Inja) with Najin’s parents and brother. Though the couple had planned to either return for the younger daughter or bring her to the land of opportunity, the Korean War intervenes.

Told from each sister’s point of view, the novel looks at their diverging paths and life experiences given their completely different upbringings and the differences in their environments.

While Inja goes through frightening experiences, leaving her war-torn home to flee for a safer part of the country, Miran lives in relative luxury, although she constantly feels excluded and alienated being surrounded by people who look different from her.
To discuss the novel, Korea JoongAng Daily interviewed Kim by email. Below are the edited excerpts.


Q. The story was written based on your experiences. How does your family’s story compare to that of the fictional family, particularly with regard to the two sisters?

A. The character Miran is a composite fictional character of three sisters and one brother, though a few of her life experiences were drawn from my life. Her story was far more fictionalized than Inja’s story. I had interviewed my “Korean sister,” Sun, extensively, and so had lots of her stories that I thought fit well into a dramatic arc for a novel. I always thought Inja was at the heart of this novel, that this was primarily her story, and that Miran’s story lay as contrast to what her American life might have looked like.


The book depicts the emotions experienced and situations faced by people who endured the war. Other than what you and your family went through, how did you pull together details for the story?

I did extensive research, as much as I could in English, about the Korean War, and found many photographs of war refugees which inspired scenes and emotions. A trip to Busan was useful. One book in particular was extremely helpful toward creating the fictions of people who are living through war: “The Korean War: Part I” by Korea Military Institute, because this book documented daily, even hourly, occurrences of the war. Also helpful was “Remembering Korea 1950: A Boy Soldier’s Story,” by H. K. Shin, because he recounted details of that period.

Because I was fascinated by the research into the history of the Korean War and especially its aftermath, which is less documented, it was admittedly difficult to strike a balance between the story and the history. What mattered was how the historical events affected the characters, and if they were aware of events that would eventually become notable history. If an event was large enough in the culture at the time to have seeped into daily life, I included it, knowing how I myself have lived through historical events and how they shaped my life, such as America’s Watergate hearings in the early 1970s.


What was the biggest challenge while writing the book?

You have hit on one of the biggest challenges, which was to find a workable balance between history and fiction. Another big challenge was to write the story in such a way that it would respect and ultimately honor my sister’s experience. I hope I have achieved that goal.


The backdrop of your previous novel is also Korea in earlier days. As a Korean-American author, what does it mean for you to write a novel based on Korean history?

The most frequent and gratifying comment I received about my first novel, “The Calligrapher’s Daughter,” was that the reader learned so much about Korea and this period of Korean history. As a Korean-American writer who was born in the U.S. in the 1950s, I knew so little about Korean history, though Korean culture did seep into me from my family. I was also somewhat estranged from my mother, who spoke mostly Korean while I spoke only English. Learning Korean history and writing historical novels based on my parents, and now my sister, has legitimized the “Korean” part of “Korean-American” in describing myself, as well as making me appreciate the lives of my parents and my sister in a different and more whole way.


It is interesting that both novels are inspired by your family. Is your family often a big source of inspiration? Which aspect of your family inspires you the most?

My family’s history is a big inspiration in my writing because, since my parents were born in 1909 and 1910, it parallels so much Korean history. Some of the questions raised in “The Kinship of Secrets” are questions that interest me in life: Are secrets meant to be exposed or is it charity to keep them hidden? How do family members who are estranged either forcibly by war or are alienated culturally find the bonds of love that will make them a family? What kind of love would allow a mother to abandon her daughter?

While I never intentionally set out to create “strong-willed” or “strong-headed” women, it turns out my fictional women are thus characterized. In addition to the fact that my mother was both these things, and highly creative as well, I think that these characteristics came about in attempting to interpret Korean women for an American readership. I wanted to portray the women in my novels as unique and powerful individuals, also as a way to assertively avoid stereotypes of Asian women.