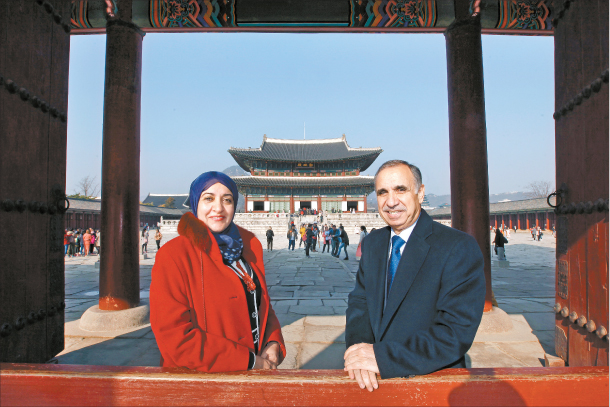 Ambassador of Jordan to Korea Adel Adaileh, right, and his wife, Eman Aldomur, in front of Geunjeongjeon Hall, the imperial throne hall, at Gyeongbok Palace in central Seoul on Nov. 26. [PARK SANG-MOON]

When Gyeongbok Palace was built in 1395, three years into the beginning of the Joseon Dynasty (1392-1910), the arched roofs of the palace could be seen from miles away as they towered above residential hanok, traditional Korean houses, in the area.

Fast forward to today, and it is not hard to catch a glimpse of the palace grounds and throngs of visitors in hanbok (traditional Korean clothes) near Gwanghwamun Gate from skyscrapers nearby, including the Jordanian Embassy in Seoul.

“Gyeongbok Palace reminds me a lot of Petra,” said Jordanian Ambassador to Korea Adel Adaileh as he walked on the palace grounds on Nov. 26. “There are thousands of years of history behind both structures that tell us stories about the countries.”

As the top envoy walked through Heungnyemun Gate, over Youngje Bridge and through Geunjeongmun Gate, Geunjeongjeon Hall, which used to house the throne of Joseon Dynasty kings, came into view against the backdrop of Mount Bugak and Mount Inwang.

“Gyeongbok Palace has beautiful gates,” said Eman Aldomur, wife of Ambassador Adaileh. “As you cross each gate, it adds to the suspense before seeing a pavilion or a hall behind it. We have something similar at Petra, called the Siq.”

The treasures of the once-hidden ancient civilization of the Nabataean Kingdom (4 B.C.–A.D. 106) in Petra are at the end of a gorge lined on either side by towering rose-colored rocks. This pathway is called the Siq.

“Gyeongbok Palace and Petra offer endless surprises as you venture into the area,” said Ambassador Adaileh. “At the end of the Siq, the Al-Khazneh, built as a tomb for the kings at the time, appears dramatically. And in Gyeongbok Palace, as you walk in beyond the Geunjeongjeon Hall you are met with Gyeonghoeru Pavilion and the Hyangwonjeong Pavilion — beautiful sites and treasures of Korea.”
As he walked on the palace grounds, the top envoy traced the histories of the two countries. The following is an excerpt from the interview.

Left: The Treasury at the Petra in Jordan lights up by candlelight at night. Right: Wadi Rum, also known as the Valley of the Moon, is a famous spot in Jordan for tourists seeking to camp under the stars. [JORDAN TOURISM BOARD]

Q. When was the first time you visited Gyeongbok Palace? What was your initial impression?

A. I came not long after my posting to Seoul in August 2016 and have visited it numerous times with delegations from Jordan since. The palace is one of the most iconic sights in Korea because it shows the greatness of Korea’s history. I like the many beautiful sites in the palace, such as Gangnyeongjeon Hall, the living quarters and resting area for the king; Geunjeongjeon Hall, the main throne hall of the Palace; Gwanghwamun Gate, the imposing main gate of the palace; and Sujeongjeon Hall, the sleeping quarter of the king.

I have to say, one of the must-visit places in the palace grounds is the National Palace Museum with more than 40,000 artifacts from the royal court of the Joseon Dynasty.

How does the palace remind you of Petra?

Gyeongbok Palace and Petra offer endless surprises as you venture into the area. For example, at the end of the Siq, the Al-Khazneh, built as a tomb for the kings at the time, appears in a dramatic fashion. And as you walk in beyond the Geunjeongjeon Hall in Gyeongbok Palace, you are met with the Gyeonghoeru Pavilion and the Hyangwonjeong Pavilion – both beautiful sites.

There are thousands of years of history behind both structures that tell us today stories about the monarchies. And the various kinds of archaeological materials excavated from both sites show that the location of the palace and Petra were at the crossroads of trade on the Silk Road. 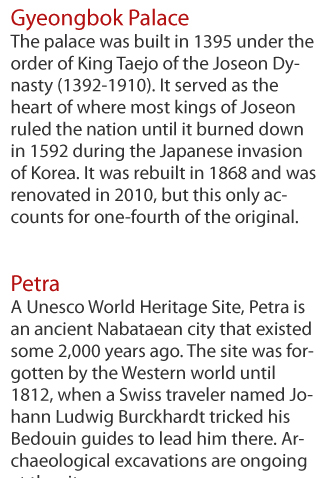 Tell us more about Petra.

Petra is known as the rose-red city, one of the most famous archaeological sites in the world, and one of the seven wonders. It was carved in sheer rock 2,000 years ago by the Arab Nabataean Empire and became the capital of the state, located 240 kilometers (149 miles) south of Amman.

After the city was rediscovered in 1812, Petra became increasingly known as a fascinating and beautiful ancient city, and it began attracting visitors and tourists from all over the world. In 1985, Petra was designated as a World Heritage Site, and chosen by the Smithsonian Magazine as one of 28 places to visit before you die.

There are ongoing archaeological excavations at Petra. How much of the area is open to the public?

Around 90 percent of the remains in Petra have yet to be discovered. The total area of Petra Nature Reserve might be around 250 square kilometers (96 square miles).

For this reason, the Petra Development and Tourism Region Authority and the Jordanian Antiquities Department have launched a project to analyze and uncover the buried remains in the ancient city of Petra. Whenever a part is restored, it is opened to citizens and tourists.

Gyeongbok Palace is sometimes better enjoyed under the moonlight. Tell us about what it’s like to visit Petra at night.

Petra under moonlight allows tourists to feel the splendor of the place’s image and sound. Petra at night has its own charm; the tourist program in Petra includes a visit to the site at night which starts from the entrance gate of Petra, goes through the arch and ends at the Treasury.

The number of tourists to Jordan from Korea has dropped recently over concerns regarding regional conflicts.

We used to have 35,000 to 40,000 Korean tourists in Jordan annually around four to five years ago, but after situations arose in the Middle East, the number has dropped to around 18,000 as of last year. The Jordanian Embassy in Korea is working with tourism groups and Korean authorities to bring this number up.

I would like to take this opportunity to emphasize that touring in Jordan is completely safe these days and that there are many tourism operators from all over the world actively engaged with tourism in the country.

Any other areas in Jordan you would like to recommend to visitors?

I would also recommend visiting the Dead Sea. It’s the lowest point on earth, 400 meters (1,312 feet) below sea level, surrounded by the stunning landscape of the Jordan Valley and the mountains of Jordan.

It’s also the saltiest sea on Earth, with 33 percent salinity compared to the 3.5 percent average salinity rate in other seas.
The Dead Sea is a popular place for those who are looking for relaxation and recreation — tourists can also cover themselves in the mineral-rich mud at the beaches of the Dead Sea.

One should also make time to visit Wadi Rum. Known as “the Valley of the Moon,” it is a unique place where tourists can sleep under the stars in five-star tents. It offers an experience unlike anything else on Earth.

Due to the spectacular nature of Wadi Rum, a number of international directors and producers have filmed movies and dramas in Wadi Rum, including for the popular drama series, “Misaeng,” which filmed there and Petra, Jerash and Amman. 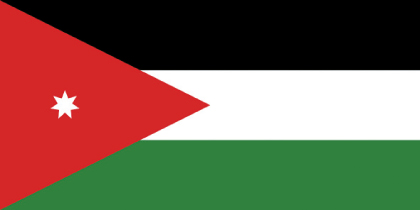 Bilateral cooperation in the energy sector has been growing. Korea Electric Power Corporation, which is responsible for 24 percent of the entire power generation in Jordan, is building a gas power plant and wind farm in Jordan.

The Korean Atomic Energy Research Institute and Daewoo Engineering and Construction Company constructed a nuclear research reactor in Jordan at the Jordan University for Sciences and Technology. There is also a plan for Daelim Energy Company and Korea Southern Power Company to build a wind farm in Jordan.

There are more than 17 Korean companies operating in Jordan including Samsung and Daewoo International. Samsung and LG Electronics have established their office in Amman, the Levant Region, Jordan, Syrian, Iraq and Lebanon. Tonymoly will open two shops in Amman in 2018.

Ambassador Adel Adaileh arrived in Korea in August 2016. He was previously director of the Asian department at the Jordanian Ministry of Foreign Affairs and ambassador to Azerbaijan. His previous postings include Palestine, Romania and Chile. He is married to Eman Aldomur with two sons and two daughters.

Eman Aldmour has a bachelor of arts in management from the University of Baghdad and a diploma in education from Al-Quds University. She worked for the Income Tax Administration in Jordan, and has been involved in many social and cultural activities in Korea.