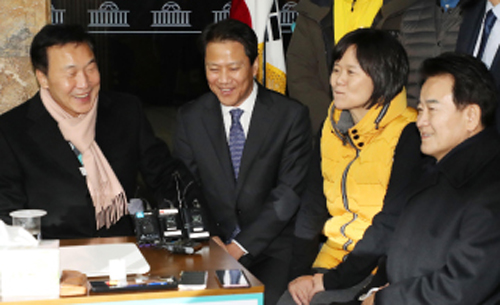 Presidential Chief of Staff Im Jong-seok talks with the chairpersons of three minor parties who have been staging a hunger strike at the entrance to the main conference hall of the National Assembly to demand electoral reform, on Saturday. From left: Sohn Hak-kyu of the Bareunmirae Party, Im, Lee Jung-mi of the Justice Party and Chung Dong-young of the Party for Democracy and Peace. [YONHAP]

The floor leaders of the ruling Democratic Party (DP), the main opposition Liberty Korea Party (LKP) and three other minor opposition parties said they will come up with a new proportional representation system and pass a related bill in the extra session in January.

They also agreed to extend a political reform panel’s operation past its December deadline to mull ways to revise the current voting system. The panel is required to confirm the constituencies by April, one year before the parliamentary election slated in April 2020.

The National Assembly has 300 members elected to four-year terms, with 253 in single-seat constituencies and 47 members by proportional representation.

The DP and LKP - which together control 245 seats - favor the current winner-take-all district scheme, while minor parties demand a voting system in which parliamentary seats are tied to the percentage of voters’ support for different parties.

With the agreement, the chiefs of the liberal conservative Bareunmirae Party and the progressive Justice Party stopped their nine-day hunger strike.

President Moon Jae-in said he will accept an electoral reform bill with bipartisan support to more accurately represent voters’ support for a party.

“If the National Assembly reaches an agreement [on a new electoral system,] I will support it,” Moon was quoted as saying by his chief secretary Im Jong-seok, who visited the two minor party leaders on a hunger strike earlier in the day.