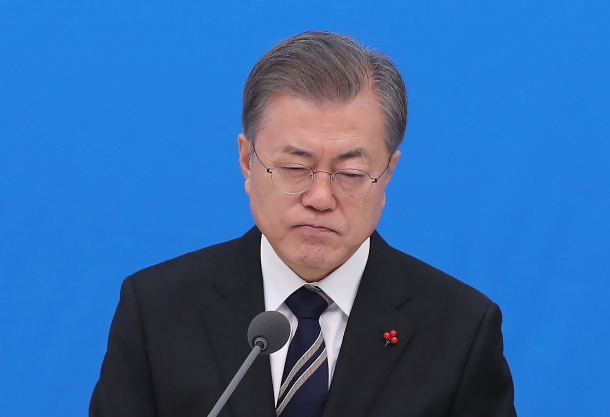 The Moon Jae-in administration on Monday laid out a new direction for economic policy next year that focuses on reviving the economy and stepped back from the so-called income-led growth policy that has cost countless jobs.

During an expanded ministers meeting, which President Moon attended for the first time, he emphasized the need to reanimate the economy.

“In order to achieve the innovative, inclusive nation, we have to put policies that would vitalize the economy through innovation in regulation and encourage investment and, at the same time, lift regional economies and balanced development,” Moon said.

“We will significantly increase industrial budgets in vitalizing the economy while also expanding an inclusive [economy] budget that improves the quality of life and welfare.”

Moon toned down his rhetoric on income-led growth, a key pillar of “J-nomics,” as his policy has been dubbed. He said the government would look into supplementary measures to mitigate the effects of minimum wage hikes and a shorter workweek.

“On new economic policies such as raising the minimum wage and the shortened workweek, it is most important to push them with the consensus of the public, considering the [different] positions of interest groups,” he said.

While taking a step back rhetorically, the president still expressed faith in his economic policy.

“It’s difficult to radically change an economy in a five-year term,” Moon said. “In the process of changing the economic policy direction [to income-led growth], there could be some controversy and doubts, but we need to take an attitude to see [the changes] bear fruit with patience.”

Many worry that the income-led growth policies have cost jobs, especially among lower-income households that were supposed to be benefitting. 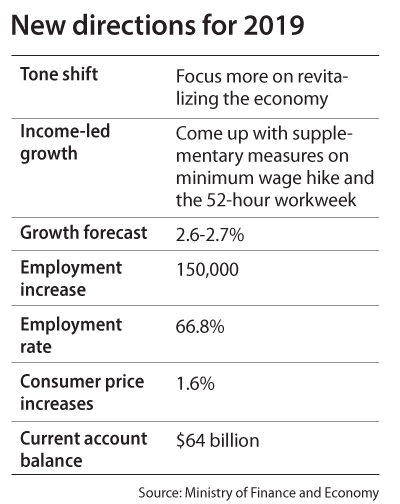 It was a turnaround from his more confident stances of earlier this year.

On May 31, Moon contradicted jobs and income inequality statistics saying the higher minimum wage contributed to expanding jobs and improving the incomes of lower-income households. Those comments prompted a backlash of criticism questioning the kind of data Moon was receiving.

Until he was let go last month, Moon’s top policy adviser, Jang Ha-sung, insisted that the positive results of the policies would be felt at the end of this year.

With only two weeks left on the calendar, various indicators show people in lower-income groups being paid less paid or losing their jobs altogether.

This has led Moon’s popularity to fall, especially among young men. The most recent Gallup poll showed only 45 percent in favor of the president, a fall of 4 percentage points compared to the previous week.

“The economics team is concerned about the impact of next year’s minimum wage hike [10.9 percent],” Hong said. “Next year, we have secured a job stabilization fund worth 2.8 trillion won [$2.4 billion] and we have made large adjustments on the standard on which the fund will be given, and we have also tripled the budget on EITC [earned income tax credit].”

He said the government will come up with a measure that will help small business owners especially affected by the higher minimum wage.

“This year’s policy goal is to focus mostly on revitalizing the economy,” Hong said.

The government forecast next year’s growth at between 2.6 and 2.7 percent, the same as this year’s. That is the lowest since 2012, when the economy grew 2.3 percent.

The government said next year’s exports growth will be 3.1 percent compared to this year’s 6.1 percent, and as a result, next year’s current account surplus will shrink from this year’s $74 billion to $64 billion, down 13.5 percent.

The number of new jobs will improve compared to this year’s but will still be only half of what it was in 2017. In 2017, 320,000 people were added to the number of people employed. For this year, the government estimates 100,000 and for next year 150,000. This view is more positive than forecasts from private think tanks.

The Hyundai Research Institute on Sunday projected next year’s economic growth at 2.5 percent, a 0.1 percentage point drop from a projection it made in October. The report noted that next year’s outlook was downgraded because of instability in the global trade market and weakening domestic market.

It said consumer spending growth will be 2.4 percent, lower than this year’s 2.7 percent citing a contracting labor market, worsening consumer sentiment and higher debt payment as a result of the central bank’s recent interest rate hike. Exports aren’t looking bright either with trade conflict between the United States and China expected to be prolonged. In addition, the semiconductor market is showing signs of slowing down.

On Monday, the Korea Economic Research Institute released an even more depressing outlook projecting next year’s growth at 2.4 percent.

Finance Minister Hong said refocusing the policies on vitalizing the economy does not mean that this administration has given up on income-led growth.

“All three notions - income-led growth, innovative growth and a fair economy - are very important agendas,” Hong said. “Next year, we will continue to push income-led growth projects but with reinforcement.”

According to the policy direction report, the government will be green lighting major projects that will allow companies to push on with investment, which the government estimated at 6.4 trillion won ($5.7 billion) or more.

This includes Hyundai Motor’s Global Business Center in Samseong-dong, Gangnam District, southern Seoul. The Korean automaker is expected to invest 3.7 trillion won in the construction of a 105-story skyscraper, which will includes exhibition and convention and tourism facilities.

Other measures include supporting start-ups, including inheritance tax exemptions for parents who donate 500 million won to children starting a business, three years of exemptions on income and corporate taxes and an additional 50 percent cut for two more years on those who start businesses in underdeveloped neighborhoods.

To boost consumption, the government will be extending the 3.5 percent tax rate, which was lowered from 5 percent, on individual consumption taxes for purchases of cars for another six months until June next year. To vitalize local tourism, it will be considering allowing additional inner city duty-free shops and allowing group visas for Indians.

To boost the export competitiveness, it will be providing 6 trillion won in financial aid to build global plants and smart cities.