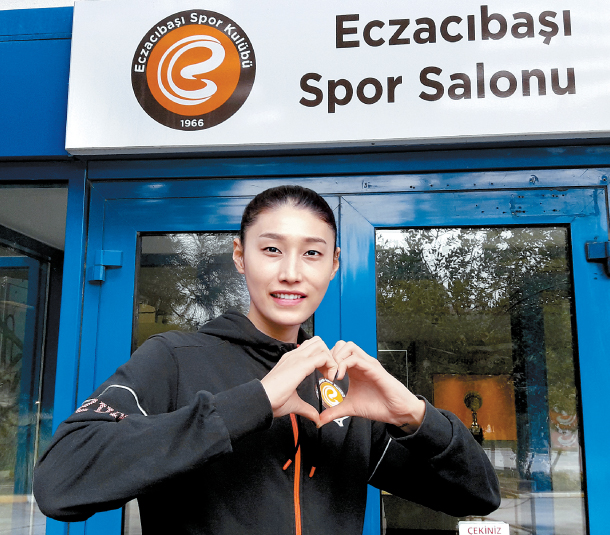 Kim Yeon-koung poses for a photo in front of Eczacibasi Spor Salonu in Istanbul, Turkey, on Friday. [KIM HYO-KYUNG]

Kim Yeon-koung’s decision to return to the Turkish league this season leaves her with little time to rest between her national team and club commitments, but the volleyball superstar isn’t complaining.

After her one-year contract with Shanghai ended at the beginning of this year, Kim announced her return to the Turkish league, signing with Eczacibasi VitrA. With Eczacibasi, she has been busier than ever, playing in the CEV Champions League, Turkish league games and traveling to China to compete at the club championship.

Although she missed one full season in the most competitive league in women’s volleyball, Kim fulfilled her role in helping Eczacibasi win the Turkish Women’s Volleyball Super Cup this season.

Last year, Kim concluded her six-year stint with Fenerbahce and joined Shanghai to have a more flexible schedule that allowed her to concentrate on the Korean national women’s volleyball team. Although her contract reduced by two-thirds, she was able to prepare herself better for the national team schedule.

Despite having more time on her hands, the results were disappointing. Kim led Shanghai to win the regular season but finished runner-up at the championship. The national team didn’t see much success either, failing to defend their title at the Asian Games and failing to advance out of the first round at the World Championship with a record of one win, four losses.

“I was embarrassed and very disappointed because I really wanted to play well at the World Championship,” Kim said. “But at another point, it was an obvious result. The starting players on the national team were almost worn out as they played the Nations League, Asian Games and the World Championship. We tried to focus on our game, but honestly, it was difficult. Personally, I felt a big responsibility.”

Kim first got onto the national team at age 18 and is captain. Since she will be 32 years old at the 2020 Tokyo Olympics, it will likely be the last tournament Kim will play in for the Korean national women’s volleyball team.

“I think it’ll be good to play until the Tokyo Olympics,” Kim said. “I like the national team members we have now. I have competed in two Olympics but didn’t win a medal. In Tokyo, I really want a medal.”

The Korean women’s volleyball team has won an Olympic medal once before, when they finished third in 1976. With Kim on the team, Korea barely missed the podium by finishing fourth in 2012 and fifth in 2016.

“There’s a high possibility of the preliminary games being hosted in Thailand,” Kim said. “I’m only thinking about winning.”

Once Kim’s contract with Shanghai ended at the beginning of this year, there were rumors that Kim may be returning to the Korean league. In the Korean women’s volleyball league, there’s a salary cap set at 1.4 billion won ($1.2 million).

“For now, I don’t plan on heading back to Korea,” Kim said. “Contracts are one of the problems, but for now, I want to compete against the world’s best players and play in a bigger league. I do want to go back to Korea, but I don’t know when. It’s not now.”

Currently with Eczacibasi, Kim is teamed up with the world’s best players as her teammates, including Jordan Larson of the United States and Tijana Boskovic of Serbia. Kim has spent her career leading teams, but now she has a different role and spends more time in receives and less in attacks.

“I like receiving,” Kim said. “But I want to score more. To be honest, the team used to be centered on me, but that’s not the case now. I’m learning a lot from it. This experience will help me.”

At age 30, Kim is close to retirement, but for now, she is not thinking much about leaving the court.

“I never thought about it,” Kim said. “I’m doing well now. If possible, I want to play volleyball for as long as I can.”

In addition to a long career, Kim also hopes to develop the sport in Korea for young people. Last year, Kim hosted a youth tournament named after her, and this year, she opened a sports academy. It has already reached 800 members and counts former volleyball player Kim Sa-nee among its coaching staff.

“Thailand was weaker than us before, but now they’re not an easy team to beat,” Kim said. “That is because they have a strong development structure in their youth and national team. Kids are the future of volleyball.”