Minister of Land, Infrastructure and Transport Kim Hyun-mee, fourth from left, joins hands with local government heads including Seoul Mayor Park Won-soon, left of Minister Kim, and Gyeonggi Gov. Lee Jae-myung, right of the minister, showing the central government and the local government’s cooperation in the development of four new towns that was announced at the government complex in Seoul on Wednesday. [YONHAP]

The government selected three areas around Seoul to allow developments of 155,000 apartment units to stabilize the real estate market.

Distance was a key factor. All four areas are 30 minutes from the nation’s capital.

According to the Ministry of Land, Infrastructure and Transport the areas that have been selected for the building of so-called new towns are Gyeyang District in Incheon, and in Gyeonggi, Wangsuk District in Namyangju, Gyosan-dong in Hanam and Gwacheon.

“All four areas are located between Seoul and the first new towns,” said Land Minister Kim Hyun-mee. “They are either right on the edge of Seoul or located very close. As there is sufficient metropolitan [public] transport including GTX [high-speed rail], it will be possible to travel to them in around 30 minute from downtown Seoul.”

The areas are roughly two kilometers (1.24 miles) away from Seoul’s border, closer than the first batch of new towns which are 5 kilometers away.

New towns are government-planned urban developments located around the capital whose purpose is to relieve overpopulation in Seoul. These new towns are supposed to be self-sufficient. 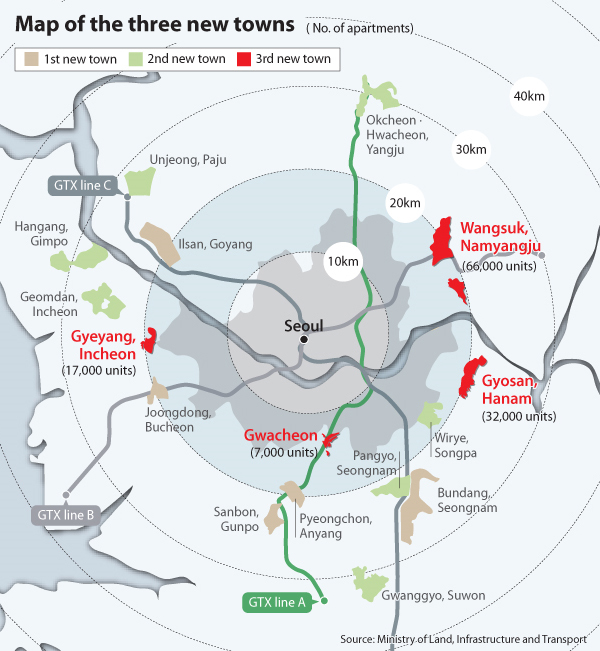 According to the ministry, the new town in Namyangju will be the largest by area and number of apartments.

The specific locations will be determined in the second half of 2019, and the apartments will be ready to be moved into starting in 2021.

Kim said the new towns are not meant to only serve as bedroom communities for people to commute to and from Seoul and should develop their own industries and jobs.

She said all the kindergarten in the new towns will be public, and the profit generated from their development will be used on public welfare projects such as libraries and community centers.

“We will secure natural parks that are 1.5 times larger [than in existing new towns] and supply hydrogen-fuel cell buses so residents won’t have to worry about pollution,” Kim said.

The new towns were a follow-up to measures announced on Sept. 21 to cool the real estate market. At that time, the government promised 35,009 new apartment units within the greater Seoul area, including Gyeonggi and Incheon, by utilizing underdeveloped or deteriorating areas in cities, including the Seongdong Detention Center in Songpa District, southern Seoul. At the time, the government said it would announce four to five candidates for new towns before the end of the year.

On Sept. 13, the government promised 300,000 new housing units in the greater Seoul area to cool the real estate market.

The Moon Jae-in administration has been trying to cool the market since it took office in May 2017 with tougher loan regulations announced in August of that year.

However, the real estate market has shown little signs of cooling off. Some buyers have taken out jeonse, or long-term deposit rent loans, instead of mortgages or borrowed under the guise of being in the apartment rental business. Those loans are easier to get than mortgages.

Analysts have argued that if the government wants to cool off the real estate market, it needed to do more.

But according to the government, apartment sales in November fell 13.8 percent compared to a year ago.