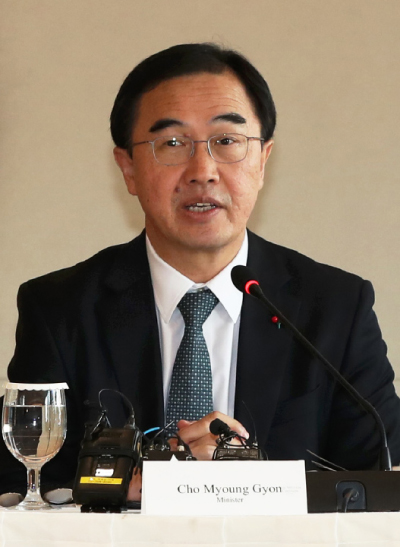 The first few months of 2019 will decide the fate of denuclearization on the Korean Peninsula, Unification Minister Cho Myoung-gyon told reporters on Wednesday.

“In terms of denuclearization, we can conclude that the process has failed to get on track so far,” Cho told journalists at an end-of-year press conference in central Seoul. “Given that the major players and surrounding countries have major domestic political issues on their agenda around 2020, next year - up to February or March in particular - will have a major impact on the future direction of events on the Korean Peninsula.”

Cho said that during 2018, the relationship between the two Koreas went beyond normalization of ties.

“I would call it a period of transition until [inter-Korean relations] are institutionalized,” he said.

To ensure both inter-Korean harmony and denuclearization proceeds next year, the minister vowed that Seoul will continue to act as a mediator between Pyongyang and Washington.

The “major domestic issues” Cho mentioned are likely a reference to the presidential elections in the United States and the 75th anniversary of the founding of the Workers’ Party, North Korea’s ruling party, and the legislative elections in South Korea.

A high-ranking government official further stressed the importance of next year. He said that when a new U.S. Congress comes into session next February, with the Democrats in control of the House of Representatives, U.S. President Donald Trump’s North Korea policy will likely become a major point of controversy if talks continue to stall.

“If the negotiations fail to proceed forward before then, they are likely to become even more difficult in the future,” the official said, adding that inter-Korean relations will inevitably be affected by this.

A continued impasse would also add pressure to the North Korean regime, he said. It has repeatedly stressed economic development as a major objective for the 75th anniversary of the founding of the Workers’ Party.

“It is a desperate issue [for the North Korean leadership] to alleviate the international sanctions and arrange an economic environment where they can begin to grow,” he said.

The official said that he believed the North’s recent wavering on denuclearization is due to their uncertainty over whether the United States is willing to reciprocate if the North eliminates its nuclear and missile programs.

“A second U.S.-North Korea summit where both sides can further specify and build on agreements made at Sentosa [during the first summit] - like substantive steps on denuclearization from Pyongyang and a regime guarantee on Washington’s part - would be an encouraging sign in the first quarter of 2019,” he said.

The official said that a fourth inter-Korean summit, in which North Korean leader Kim Jong-un would visit Seoul, could help promote a future Trump-Kim meeting.

One meaningful measure that still holds relevance as a negotiation card is announcing a formal end to the 1950-53 Korean War, which would serve to build mutual trust, the official said. He added that for the moment, however, the United States seems to regard ending the war as too big of a reward for the North, while Pyongyang would prefer to see sanctions lifted instead.