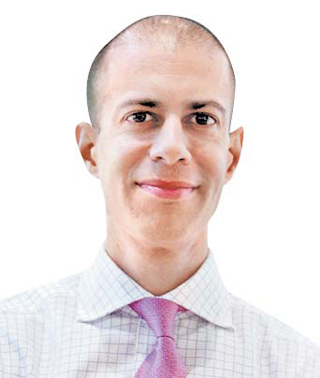 As a leading nuclear strategy expert and professor at MIT, Vipin Narang is a fixture in the American media whenever the issue of North Korea’s denuclearization is discussed.

Narang shook up the political science world by challenging the traditional theory of nuclear deterrence, which argues that the sheer destructive capacity of nuclear weapons deters states from engaging in armed conflict. His alternative “posture optimization theory” implies that what is more relevant are the different postures and strategies that nuclear powers adopt regarding their weapons.

Based on this theory, a nuclear-armed North Korea would be tolerable as long as it acted responsibly and did not maintain an aggressive posture or export its nuclear technology abroad. Opening up political space is the objective of the North’s nuclear program, Narang says, as well as deterring a possible American invasion.

JoongAng Sunday interviewed Narang at his office at MIT on Dec. 4 - the first time he has been interviewed by a Korean media outlet.

Q. What is the goal of the Trump administration? Is it the complete denuclearization of North Korea or maintaining the status quo with no further intercontinental ballistic missile (ICBM) tests?

A. The Trump administration is not monolithic. The wing of the administration led by National Security Adviser John Bolton wants a unilateral North Korean disarmament induced by maximum pressure. If not through this, for them there are few alternatives available - denuclearization by force is the ultimate and the last-resort option.

President Trump is different. He inherited a bad hand with no good options. The initial hypothesis was that he does not understand that North Korea is not disarming. It is a denuclearization by denial. Over time, this approach will became unsustainable as leaks continue to emerge, such as a recent one over missile operating bases in the North.

When Trump tweeted that “we knew about this” (the leaks over missile operating bases), to me it was a leading indicator that Trump does not care whether the North is disarming. His goal is to stop the test. As long as missiles are not flying over Hokkaido and there are no tests, the political threat that Trump wants to solve - posed by the testing sequence - no longer exists. I am leaning towards a hypothesis that Trump may have recognized that you cannot denuclearize them by force because that would certainly risk a war on the Korean Peninsula and nuclear weapons going off. If you cannot get rid of their nuclear capabilities, at least you can reduce tensions on the Korean Peninsula. So long as the diplomatic process is going on, the problem is not a political one.

Is the denuclearization of North Korea a possible policy goal?

As a long term goal, U.S. policy cannot walk away from the North Korean nuclear problem. People tend to forget that U.S. policy on India and Pakistan after May 1998 when they tested nuclear weapons was cap, roll back and eliminate. India was later kind of in the mainstream of nuclear powers with a civil nuclear agreement (123 Agreement). There are precedents out there where the United States says the long term goal is disarmament, and I think it probably is. It is in the definition of the Obama government, about getting down to a global zero, and Kim Jong-un highlighted over the year that North Korea will give up its nuclear weapons when everyone else does.

In the short term, the question is how you manage a nuclear North Korea - a reality. Lots of misconceptions are out there. Let’s stipulate that Kim Jong-un is not going to voluntarily relinquish his nuclear weapons. One camp says that North Korea is not going to give up its nuclear weapons and we have to take them away by force - because they will use them offensively like Pakistan.

The focus of the diplomatic effort should be on arms control - encourage North Korea to be a responsible nuclear power, not to export nuclear technologies to other states, no more trades with Pakistan to advance its nuclear capabilities and push nuclear weapons into the background. We want North Korea to look like India - a responsible nuclear power - where nuclear weapons are on the background and the focus is on economic development. There are meaningful objectives, short of disarmament, that we should be talking about: caps on fissile material production, caps on deployment of certain missile capabilities. By focusing on total disarmament - an all or nothing approach - we are missing that opportunity.

A short-term goal of arms control and a long-term one of disarmament - wouldn’t such goals give the North the wrong impression that they could become like India and Pakistan, both of which ultimately became nuclear states?

USFK can be held with artillery, and it is really Andersen Air Force Base in Guam and U.S. bases in Japan where we will be staging conventional attacks. North Korea has to use nuclear weapons to destroy these bases and hold ICBMs to deter American nuclear retaliation. For South Korea, this does not change much. It does change the U.S. calculation when the U.S. homeland is at risk. In a lot of ways, Trump’s way of stopping North Korea from testing may actually slow down their ability to perfect their ICBM and thermonuclear capabilities. Whether he stumbled into it intentionally or accidentally, Trump deserves some credit.

What is a realistic goal from a South Korean point of view?

From my own perspective, I understand South Korea’s predicament and why President Moon has gone all in towards an inter-Korean process, because that is the only way to reduce the threat. President Moon has calculated - look, they are not giving up their capabilities, and taking them away would probably impose a greater cost to South Korea. So the way to reduce the threat is to disincentivize Kim from having hostile relations with South Korea.

Why have negotiations slowed down in the aftermath of the Singapore Summit? Why have U.S. Secretary of State Pompeo and Special Representative for North Korea Stephen Biegun not been able to sit down with their counterparts?

The U.S.-North Korea process now depends on a leadership summit. To my knowledge, there has not been a working-level meeting. That’s because North Korea decided that working-level meetings are pointless. Dealing with Pompeo and Bolton is the only downside risk. So long as Trump seems to be committed to the second summit, what incentives do North Koreans have in meeting with Pompeo and Biegun?

If Trump and Moon hadn’t been in office at the exact same time, Kim’s strategy might not have worked. If you had Park instead of Moon, there is no way that this inter-Korean process would had moved on. If you had Hillary Clinton as president, she would probably not have met Kim. Here Kim Jong-un has such a confluence of events that he cannot believe his luck. North Korea pretends to disarm and Trump pretends to believe them.

What is North Korea’s posture on its nuclear weapons?

The purpose of the North Korean nuclear program in crisis would be to offset and deter a conventional invasion led by the Americans. The theory of victory for North Koreans is: How do you slow down the American assault?

North Korea already had conventional artillery targeting Seoul and the USFK. What really ends up punishing North Korea is American strategic bombers and aircraft - you cannot target it with conventional artillery and you need a fission device.
The rational nuclear strategy is to use nuclear weapons first on Guam, Okinawa, Yokosuka. At that point, you’ve just used nuclear weapons on U.S. territories - that’s why a nuclear ICBM is important. In a world in which North Korea has survivable ICBMs held in reserve, they can deter American nuclear retaliation by putting U.S. cities at risk.

The wrinkle on that is right now North Korea cannot be confident in its long-range systems, at least in the short to medium term. North Korea cannot restrict its first use limited to just military bases in the theater. It may have to fire at everything all at once.

This changes American calculations a lot, and North Korea can manipulate this risk of nuclear instability, the threat of going first with everything, because it is so worried about its survival and nuclear command and control - really gives American a pause. This period is when Kim Jong-un’s threat is the most serious, as he may have a very itchy trigger finger.

The better analogy is Cold War France - the idea of a pre-strategic strike. The strategy is closer to this French concept - a single use of a nuclear weapon against a military target to signal the willingness to escalate to a strategic level - being able to hold the Soviet Union at risk to such an extent that it is not worth attacking France.

What is your assessment of North Korea’s nuclear command and control? What is the risk of a so-called left-of-launch operation (immobilizing the target’s attack capacity immediately before or after a launch) - against a North Korean missile launch?

All states delegate command and control at some point. The United States delegates it in peacetime because its civil-military relations allow it to do that. India and China delegate very late - centralized during peacetime and delegated out very late during a crisis. In these two extremes - peacetime delegation and a late-crisis delegation - you have to have a lot of confidence in your command and control. Just from a structural perspective, I am sure Kim Jong-un wants centralized control during peacetime.

But if a crisis were to emerge, he cannot be confident whatever networks dedicated to use for command and control would survive - especially in an American attempt to bring it down. So the incentive is to delegate it very early. In order for the threat to be credible, it has to be delegated early in a situation of crisis. Then all bets are off. Crisis risks are very severe.

My own view is that you don’t want to give a new nuclear state an itchier trigger finger than it already has. Even if these are real or just psychological operations, we are playing with fire. If Kim Jong-un is afraid, and if he is concerned that we might have cyberoptions in the beginning of the crisis, his incentive is to delegate nuclear command and control earlier.