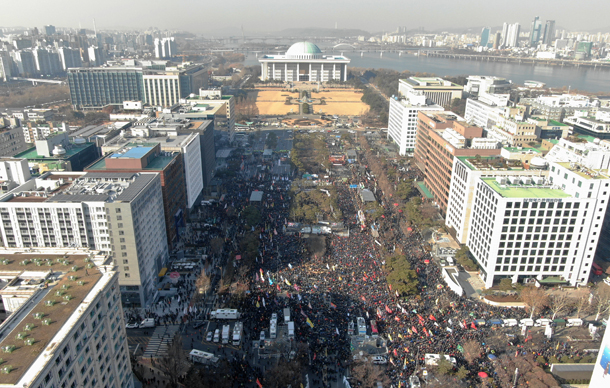 Taxi drivers from around the country hold a massive rally outside the National Assembly in Yeouido, western Seoul, on Thursday to protest Kakao’s planned launch of a carpooling service. NEWS1


Nearly a half of the country’s taxi drivers rallied near the National Assembly in Seoul on Thursday as a part of a nationwide strike to protest a carpooling service planned by the country’s largest messaging app company.

Taxi drivers around Korea started a 24-hour strike at 4 a.m. on Thursday to oppose the carpooling business of Kakao Mobility, a subsidiary of tech giant Kakao. Taxi industry representatives argue that the new service jeopardizes their livelihoods. The company has postponed the official launch of the carpooling feature, originally scheduled for Monday, in response to the taxi industry’s fierce protests.

An alliance of two taxi workers’ unions and two taxi associations planned the demonstration. The protesters demanded that the government ban the carpooling service immediately as a precondition on talks to find a compromise.

The rally was the third and the largest of its kind. The first protest had 70,000 participants and the second 40,000. A traffic jam began near the National Assembly about one hour ahead of the rally.

Protesters wore black headbands during the rally to mourn the death of a taxi driver who set himself on fire on Dec. 10 to protest the carpooling service plan. They also marched across Mapo Bridge during the protest, creating a traffic jam in Yeouido and nearby neighborhoods during the evening rush hour.

Taxi drivers originally planned to surround the National Assembly compound during the protest, but the police warned them in advance that the police would sternly punish any illegal actions that cause the public inconvenience.

Earlier in the day, there was also a severe traffic jam near the Daejeon Interchange of the Gyeongbu Expressway as taxi drivers from around the country headed to Seoul for the rally. According to the Daejeon Metropolitan Police Agency, about 800 taxis parked at major roads near the interchange as they planned to travel together to participate in the rally.

In addition to the rally in Seoul, taxi drivers around the country went on strike throughout Thursday.

According to the Seoul Metropolitan Government, the number of taxis on streets as of 3 p.m. was down by 85 percent.

“As of 3 p.m., only 3,783 taxis are operating on Seoul’s streets,” said Park Byeong-sung, head of the taxi transport policy team at the Seoul Metropolitan Government. “That is 85 percent lower than the 23,622 cars during the same hour last Thursday.”

“Not many taxis participated in the strike during the morning rush hours around 8 to 9 a.m.,” said Park. “But unions encouraged the drivers to participate, and the number of protesters went up rapidly.”

Many residents of Seoul said the strike inconvenienced them during the day.

“I have to go to a doctor’s appointment in the afternoon, but I cannot reserve a call taxi,” said a 74-year-old resident of Daechi-dong, southern Seoul.

The city government said it created an emergency transportation measure from the morning and evening rush hours. Trains and buses ran more frequently from 7 a.m. to 9:30 a.m. and 6 p.m. to 8:30 p.m. on Thursday.

Gyeonggi said 42 percent of the province’s 42,000 taxi drivers participated in the strike. A total 4,646 off-duty taxi drivers were allowed to work on Thursday, and bus services were extended.

The Incheon metropolitan government said 90 percent of the 14,371 taxi drivers in the city participated in the strike, and subway use increased. Subway and bus operations increased during rush hours, and 2,871 off-duty taxis were allowed to operate.

Around 11 a.m. at Jeju International Airport, the taxi platform was completely empty. According to the Jeju taxi industry, most of the 5,300 taxi drivers on the island were on strike. Tourists used bus services, and the province’s public servants came out to the airport and offered information.

“It is not chaos yet, because it’s not the weekend,” said a Jeju official. “We are explaining the situation to foreigners and tourists and offering alternatives.”

Taxis also disappeared from the streets of major cities such as Busan, Daegu and Gwangju. According to the Daegu Taxi Association, 16,000 Daegu taxi drivers participated in the strike. In Busan, about 90 percent of the city’s taxis, or 24,000, were not operating.

All 3,300 corporate taxi drivers and some of the 4,795 independent taxi drivers participated in the strike in Gwangju, and most of the 6,900 taxis in North Chungcheong also joined the strike.

In Daejeon, all 8,664 taxis stopped operation. In South Chungcheong, 4,300 out of 5,700 taxi drivers participated in the strike.

Kakao Mobility launched a promotion event on Thursday for the beta version of its carpooling service, but quickly shut it down after public criticism. The company gave out one free coupon per user that could be used to pay a carpool fare of up to 30,000 won ($27).

The promotion was initially scheduled to run through Dec. 31, but the company shut it down in the afternoon. It was criticized as an attempt to take advantage of the low taxi supply during the strike.

"The event was initially planned as a sign of apology to our users and carpool drivers who have to wait even more for the service's official launch due to the delay," said a spokesman for Kakao Mobility. "But we decided to put it off because the timing and external circumstances at the moment are spurring so much misunderstanding about our intention."

While taxi drivers are calling Kakao's carpooling plan illegal, the company's stance is firm ― there are no legal flaws involving the service. Korea’s transportation law bans the commercial use of privately-owned vehicles, but the practice is allowed for commuting purposes.

Kakao's carpooling service is aimed at solving the problem of the undersupply of taxis during commuting hours, the company says. It allows drivers to offer services only twice a day.