Korea has changed the graphic warnings on cigarette packs in the latest move to curb smoking, the Health Ministry said Sunday. 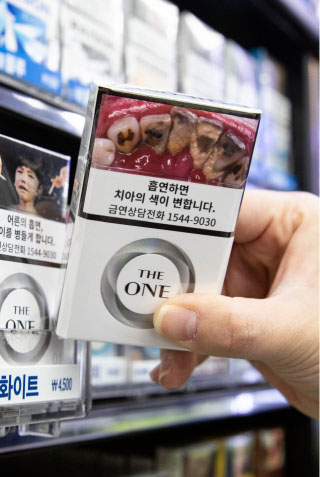 A consumer picks up a pack of cigarettes at a convenience store in Seoul on Sunday. The government has changed the graphic warnings on cigarette packs in the latest move to curb smoking. [YONHAP]

The government changes the graphic warnings every 24 months as part of its efforts to raise awareness of the effects of smoking, according to the Ministry of Health and Welfare.

The ministry said 12 new pictorial warnings will be placed on cigarette packs, including the electronic tobacco heating device called iQOS.

The ministry forecasts that cigarettes with the new warning photos will hit local shelves sometime in January.

The new graphic images show smokers suffering from fatal ailments, such as lung cancer, oral cancer, laryngeal cancer, heart attacks and strokes, while also carrying warnings about serious side effects, such as the dangers of secondhand smoke, sexual dysfunction and premature death, according to the ministry.

Separate data from the Organization for Economic Cooperation and Development (OECD) put the smoking rate of South Korean men aged 15 and older at 31 percent in 2015, the highest among 15 OECD countries surveyed. Japan came in second with 30 percent, followed by Italy with 25 percent.