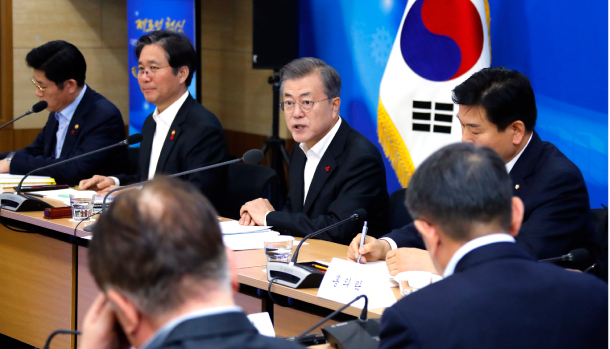 President Moon Jae-in on Dec. 18 makes a speech at the Ministry of Trade, Industry and Energy before being briefed on how to recover the vitality the manufacturing sector has lost. [YONHAP]

Giorgio Vasari (1511-1574), who designed the Uffizi Gallery in Florence, Italy, is called the father of art history. He came up with many terms we use today, such as Gothic Art, Byzantine Art and mannerism. Moreover, humanity owes him a very significant term: “renaissance.”

In his 1550 book, “Lives of the Most Eminent Painters, Sculptors and Architects,” he first used the term “rinascita,” or rebirth. He discussed the rise of Greek and Roman culture in academia and art in the 14th to 16th centuries after 1,000 years of medieval dark age. In French, the italian rinascita was translated to “renaissance.”

Renaissance has become our government’s keyword as of late. At the Ministry of Trade, Industry and Energy briefing on Dec. 18, President Moon Jae-in rebuked the lack of industrial policies and emphasized that a strategy for renaissance in our manufacturing sector was needed. It focuses on nurturing new industries, such as electric cars, in the four areas of Korea’s declining industry heartlands to create 26,000 jobs. On Dec. 20, the Ministry of SMEs and Startups announced the commercial district renaissance project to develop old downtown areas with a high concentration of small businesses.

In “The Story of Civilization,” historian Will Durant analyzed how the renaissance started in Florence. Nourishment was the money that flew into Florence — the financial capital of Europe at the time — thanks to flourishing trade and textile industries. The Medici family, which had the power and financial means to influence Europe, was a patron of academia and arts. Under the Medici, many scholars and artists gathered, including Botticelli, Michelangelo and Galileo. The synergy of money and genius let the renaissance blossom.

But a manufacturing renaissance is a different story. The companies that should lead the renaissance are reluctant. In the anti-corporate, anti-market atmosphere, they are trapped in regulation. They refrain from investment and seek to relocate. According to the Hyundai Research Institute, 1,764 overseas corporations were established in the first half of the year.

Talent is also leaving. In the brain drain index by Switzerland’s IMD Business School, Korea fell to 54th among 63 countries last year. Engines for revival are losing steam. Requirements for a renaissance are not slogans or plans, but conditions and environments to display potential. It is hard to blossom from barren soil.