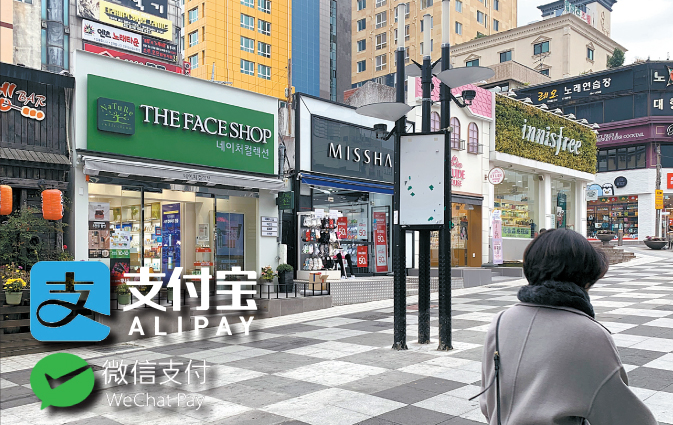 Nuwemaru Street in Yeon-dong, Jeju City, was known as Baojian street until it was renamed in April. The street had been called Baojian from 2011 when the Chinese pharmaceutical company of the same name sent 12,000 employees to the southern tourist island as a reward.

Despite the sharp drop of visitors since 2017 - when tensions between the two countries peaked with the deployment of a U.S. missile defense system - it still looks very much like Chinese territory today, with many store signs in Chinese.

Upon closer examination of the shopfronts, Chinese QR codes are also evident. 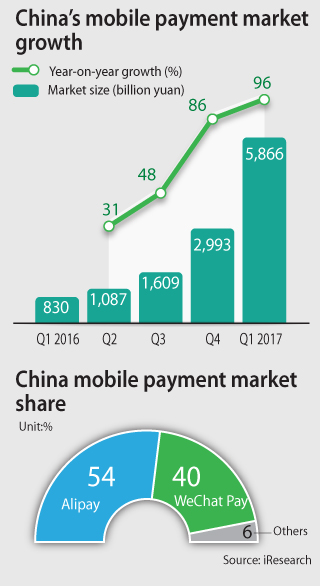 “Half the Chinese visitors use Alipay or WeChat pay,” said a store clerk of one of the cosmetic stores on the street.

Currently 1,000 stores on Jeju accept Chinese QR mobile payments. The Jeju government said it was promoting the use of Chinese mobile payments in hopes of attracting more Chinese tourists.

On Dec. 10, it signed a memorandum of understanding with the China’s Tencent, which operates WeChat, to attract more Chinese visitors to the island.

One part of the agreement calls for tourism promotions on the WeChat platform, including discount events, while a blog will be run to introduce the island to potential visitors from China.

The Jeju government and the tech company also agreed to share information on the consumption patterns of Chinese tourists who made payments through WeChat pay.

Seven top officials from Tencent attended the signing ceremony, including company vice president Zhang Ying. During the ceremony, Zhang said that the only thing he carried with him when coming to Korea was his smartphone, demonstrating that he didn’t need cash or a credit card as long as he had WeChat Pay.

“Once WeChat Pay is available at traditional markets in Jeju, it will be a great help in promoting traditional Korean culture and goods to Chinese tourists,” said Yoon Chang-ho, head of tourism and marketing at the Jeju government.

Starting in September, Hanyang University will accept tuition fees via WeChat Pay. The program is being developed with Shinhan Bank. Roughly 900 or so convenience stores and restaurants at train stations in Korea have started accepting WeChat payments.

One of the reasons Korean businesses are willing to accept mobile phone payment systems is because people tend to spend more when using them. When they buy something by simply waving their phone, they feel as though they are spending less.

To make a payment, a customer places the store’s QR code - similar to a bar code - in front of their phone camera for 10 to 20 seconds.

Chinese QR code mobile payment systems are not only used in Asian countries, such as Korea, Vietnam and Thailand. They are also being used in other places visited by Chinese tourists, such as the United States and Europe. These payment systems are even accepted at Amsterdam Airport Schiphol in the Netherlands.

Roughly 78 percent of Chinese are said to use these payment systems, while only 21 percent use either credit cards or cash.

While visiting a small restaurant in China late last year, President Moon Jae-in was surprised at the convenience of QR-code payments.

One reason the QR-code payment system has rapidly grown in China is the country’s lack of a telecommunication infrastructure needed for credit-card processing. The QR code system doesn’t require a credit card terminal, which makes it cost effective and convenient.

Although WeChat Pay joined the game late compared to Alibaba, it currently has 40 percent of the Chinese mobile-payment market, while Alipay has 54 percent. WeChat may overtake Alipay because of the popularity of its mobile messenger.

Not all commercial districts in Korea accept the Chinese mobile payment systems. One such place is Myeong-dong, which attracts huge numbers of Chinese tourists. The street vendors in Myeong-dong only accept cash.

Some critics question the growth of the Chinese payment systems. One concern is that since the networks are Chinese, it may be hard to track down the payment records, and that could lead to tax evasion.

Loopholes do exist. If a Chinese company decides to open a branch and use a payment terminal from China, it would bypass the local institutions, making it difficult for Korean authorities to keep track of the payments.

Because of such problems, the Vietnamese government in June banned the use of Alipay and WeChat Pay. It found that some money spent domestically by tourists did not go through local financial institutions.

In 2016, the tax evasion question became an issue in Thailand as well. The Thai government at the time found that Chinese businesses were evading taxes through mobile payment systems. Several travel agencies were penalized.

Some cases have been reported in Korea. In 2016, a plastic surgeon in Nonhyeon-dong, Gangnam, only accepted cash or credit cards from his Chinese patients, and the credit cards were processed using a Chinese terminal. More than 70 percent of the revenue was from Chinese patients. The hospital was found to have evaded more than 10 billion won ($8.9 million) in taxes.

Overseas customers also present a problem. According to Korea Custom Service, more foreigners are buying goods directly from Korean online shopping malls. In 2013, 67,000 purchases were made in this way, but that figure has surged to more than 7 million.

With the growing popularity of direct purchases, many online shopping malls have started accepting mobile payment systems. Since 2015, Alipay has been supporting Korean SME exporters in terms of payments and logistics.

This could result in Korean exporters evading taxes.

“There is major tax evasion going on with the significant increase of foreigners buying Korean goods directly online thanks to the Korean Wave,” said Lee Hye-hoon, then ruling Saenuri Party lawmaker, during the National Assembly’s audit on the Korean National Tax Service in October 2016. “We need to take action.”