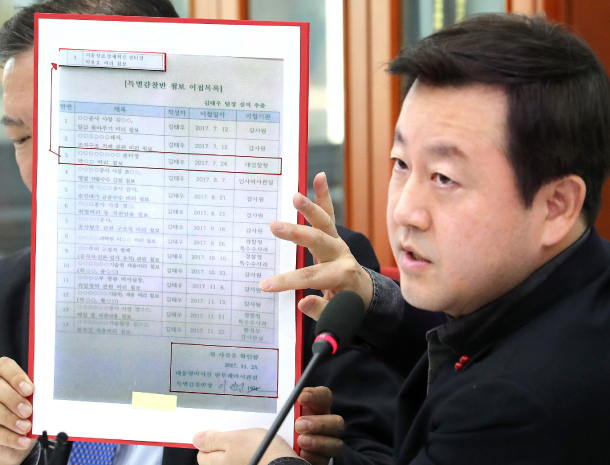 In a press briefing at the National Assembly on Sunday, former Rep. Kim Yong-nam of the Liberty Korea Party (LKP) shows a list of targets the special inspection team spied on and then transferred to other investigative bodies. [YONHAP]

The opposition Liberty Korea Party (LKP) accused the Blue House special inspection bureau of spying on the former head of the Seoul Center for Creative Economy and Innovation (Sccei), a private citizen, and said officials in the office of the presidential senior secretary for civil affairs knew about the illegal surveillance.

A team of LKP lawmakers investigating the mushrooming Blue House scandal over illegal surveillance told reporters Sunday in a press briefing that the special inspection bureau spied on Park Yong-ho - who served as head of the Sccei from July 2015 to July 2017 - and tipped off prosecutors about suspicions of alleged corruption.

The special inspection bureau was under the control of the secretary of anti-corruption, Park Hyoung-chul. The anti-corruption secretary, in turn, reports to the office of the senior secretary for civil affairs, Cho Kuk. The LKP, however, did not say whether Cho knew about the spying, only mentioning that “top officials” in Cho’s office did.

The Blue House special inspection bureau was supposed to monitor signs of corruption among high-level government officials appointed by President Moon Jae-in - mostly ministers and vice ministers - as well as the president’s family. If they found issues, they were supposed to refer the cases to investigative authorities like the police or prosecutors’ offices.

The bureau’s spying on the former Sccei chief was illegal, the LKP claims, because the Sccei chief wasn’t tapped by Moon, nor is he a public official.

Park Yong-ho told the Hankook-Ilbo last Sunday that he finished his first two-year term in July 2017 and was vying for a second term when he was informed he lost the job despite ranking the highest among all applicants in the document screening. Park said he was told by a professor who participated in the screening process that Park would be told the truth about it “decades later.”

Park said he didn’t receive a single call from prosecutors after then.

On Sunday, the LKP unveiled a list of inspections carried out by Kim Tae-wu, a former member of the Blue House special inspection bureau, who has been leaking details of his time at the presidential office to the local press for days, saying he was ordered to spy on private citizens outside the legal limits and compile damning reports that would support policy decisions of Moon’s top aides.

One report accused the Sccei’s chief of some kind of an alleged malpractice. The head of the Blue House special inspection bureau signed it, after which it was referred to the prosecution, the LKP said.

Blue House anti-corruption secretary Park told Blue House correspondents in a text message Sunday that Kim was never ordered to collect information on the Sccei’s head and that Kim probably investigated the Sccei chief before working in the Blue House in July 2017, when he worked as an investigator for the Seoul Central District Prosecutors’ Office.

Kim’s lawyer, Seok Dong-hyeon, refuted that claim, saying Kim was ordered by the head of the Blue House special inspection bureau to author a report on the Sccei chief when Kim said he had collected information on the matter.