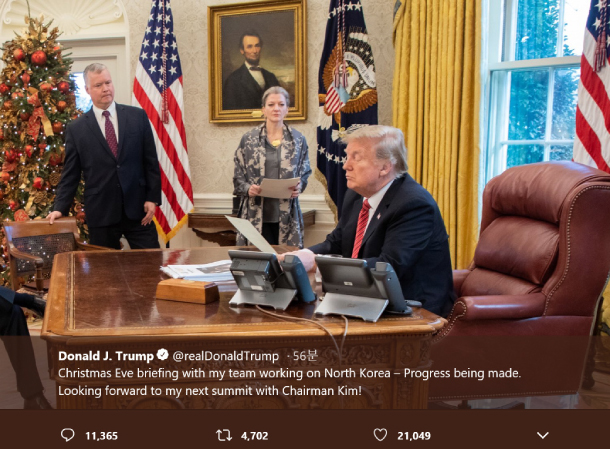 U.S. President Donald Trump posted on Twitter Monday a photo of him in the White House Oval Office receiving a briefing on North Korea from Stephen Biegun, the U.S. special representative for North Korea, and Allison Hooker, a National Security Council official who specializes in Korean affairs. [YONHAP]

U.S. President Donald Trump said in a Christmas Eve tweet that he looks forward to a second summit with North Korean leader Kim Jong-un, noting “progress” is being made in denuclearization negotiations.

Trump posted on Twitter Monday a photo of him in the White House Oval Office receiving a briefing on North Korea from Stephen Biegun, the U.S. special representative for North Korea, and Allison Hooker, a National Security Council official who specializes in Korean affairs.

“Christmas Eve briefing with my team working on North Korea - Progress being made,” he tweeted with the photo. “Looking forward to my next summit with Chairman Kim!”

Through the latest tweet, Trump extended another gesture of flexibility toward the North and a confirmation that a second summit with Kim - which he said previously is set for January or February - is still in the works.

During his four-day Seoul visit, which concluded Saturday, Biegun said that Washington is willing to allow U.S. citizens to travel to the North for humanitarian aid purposes, seen as a goodwill gesture ahead of a possible second summit.

Biegun said on Dec. 19 that an evaluation of the travel ban to Pyongyang would take place “early next year” under certain conditions, recognizing that Washington’s stiff sanctions could be impeding humanitarian aid for the North.

Washington enacted the travel ban to Pyongyang on Sept. 1 last year, soon after the death of Otto Warmbier, an American college student who died in June that year after 17 months of detainment in North Korea.

The U.S. State Department extended the ban for another year in August.

Biegun said he understands why many U.S. humanitarian aid organizations operating in North Korea “are concerned the strict enforcement of international sanctions has occasionally impeded the legitimate humanitarian assistance to the Korean people.”

While humanitarian aid is exempted from sanctions, aid groups working in North Korea have found the process of getting waivers to be difficult.

Biegun said that U.S. Secretary of State Mike Pompeo has directed him to review U.S. policy on humanitarian assistance provided to North Korea by private and religious American organizations. He added that he will have meetings with American aid groups early next year to discuss how to “better ensure the delivery of appropriate assistance through the course of the coming winter.”

Biegun also told reporters that day that Seoul and Washington will “resume discussion on how to work together to engage [North Korea] in a manner that helps us move forward and move beyond 70 years of hostility.”

Such remarks can be seen as Washington extending an olive branch to Pyongyang, but it is unclear if it will be enough to get nuclear talks back on track.

During the working group meeting Friday, Washington also agreed to make an exception to a ban on industrial materials transfers to North Korea, allowing the two Koreas to hold a groundbreaking ceremony in Kaesong for a project to connect their railways as planned for today.

Despite Washington’s indications of flexibility ahead of a potential second Kim-Trump summit, Pompeo underscored in a radio interview with NPR Friday that it is “unfounded” that Washington was relaxing its economic sanctions against North Korea by reviewing its travel ban to Pyongyang.

Pompeo added that Washington will make sure that if there is “real humanitarian need there, that we don’t deny that to the people of North Korea.”

He said that “sometimes it takes getting an American to be able to travel in there to achieve that, and where that’s the case we want to facilitate that.”

Likewise, Pompeo replied when asked if a second summit is going to happen, “I’m counting on it.”

Despite remaining mum on offers for working-level and high-level talks with the United States in recent weeks, Kim Jong-un will be making a New Year’s address that outlines his priorities for 2019, as he did in an address at the start of this year that led to an easing of tensions on the Korean Peninsula.

Thus, Seoul and Washington will be watching Kim’s messaging closely on Jan. 1.