Markets in free fall as Kospi closes down 1.31%

Markets in free fall as Kospi closes down 1.31% 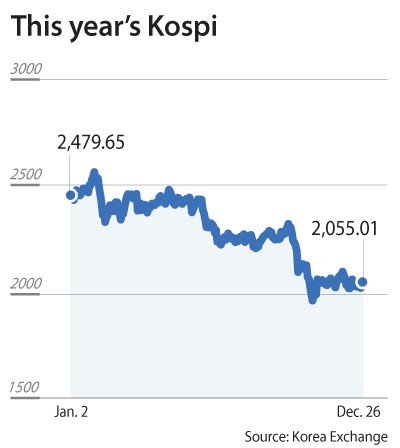 Korea’s stock markets tanked Wednesday, triggered by a holiday rout in the United States that caused the worst Christmas Eve decline in history.

The downbeat performance follows global market jitters caused by steep declines in the United States as the Dow Jones Industrial Average dropped 2.9 percent to 21,792.20 on Monday to break 1918’s record for the worst Christmas Eve performance.

Other major indexes including the S&P 500 and Nasdaq also slid more than 2 percent.

A combination of negative factors, including a partial government shutdown and concerns about a negative economic outlook, played into the rout.

President Donald Trump pushed forward his agenda of erecting a U.S.-Mexico border wall, saying that parts of the U.S. government will stay closed until his demand is met by Democrats.

The president also renewed his attacks against Federal Reserve Chairman Jerome Powell, increasing uncertainties about the economy in general.

On Twitter, he said, “The Fed doesn’t have a feel for the market. It doesn’t understand necessary trade wars on strong dollars or even Democrat shutdowns over borders.”

“Following a rumor that Trump considers firing Powell, there was a Bloomberg report that he’d like to dismiss Mnuchin,” said Lee Eun-taek, an analyst at KB Securities.

“That increases uncertainties in the markets.”

Trump’s tweets came on top of a long roster of already existing worries including the prolonged U.S.-China trade war, anxieties over Brexit and a slowdown in China as its economy is expected to worsen next year.

The International Monetary Fund painted grimmer prospects for the overall global economy this year and next, trimming its growth predictions by 0.2 percentage points each to 3.7 percent for both years.

The fund cited the trade war between the United States and China as the main factor for its changes.

Korea has its own share of concerns including a contracting jobs market, a slowdown in economic growth and the anticipated impact of a minimum wage increase that goes into effect next month.

The prospects for exports, Korea’s growth engine, are not that rosy either, since major export industries like semiconductors will likely suffer unfavorable market conditions.

Multinational financial institutions have downgraded prospects for the semiconductor sector.