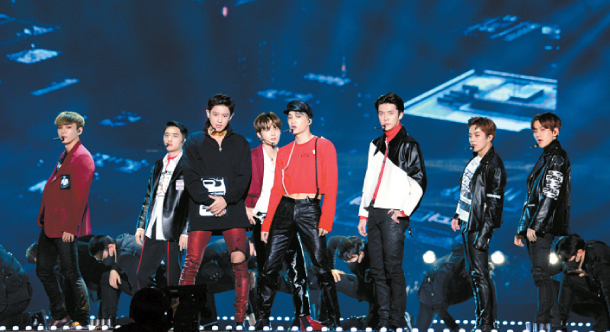 This year’s music awards centered on the theme of “The Wave,” focusing on the Korean wave that K-pop singers have been spreading throughout the world.

The 210-minute long show started at 5:30 p.m. and was broadcast live on SBS from Seoul Gocheok Sky Dome in western Seoul. It was emceed by entertainer Jeon Hyun-moo and actor Cho Bo-ah.

Global superstars BTS performed their six hottest songs, from their debut song “No More Dream” to their and latest song “IDOL.” The closing performance was given by Exo, who topped off the show with “Love Shot” and “Tempo.”

According to Nielson Korea, viewership soared to 9.4 percent when Mino revealed his never-before-heard track on the show.

SBS will top off the year with entertainment awards on Friday and drama awards on Monday.