A KBL legend leaves the court, but he’ll be back

A KBL legend leaves the court, but he’ll be back 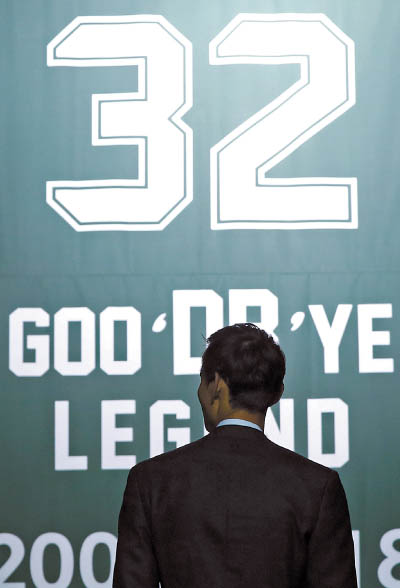 Kim Joo-sung, formerly of the Wonju Dongbu Promy, watches as his number is retired at Wonju Gymnasium in Wonju, Gangwon, during his retirement ceremony on Tuesday. [YONHAP]

Korean Basketball League (KBL) legend Kim Joo-sung of Wonju Dongbu Promy may no longer be playing, but he has started a new chapter in his career as a coach. 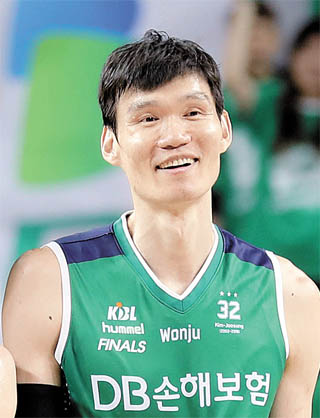 Although Kim left the KBL after the 2017-18 season, his retirement ceremony wasn’t held until Tuesday, Christmas Day. In front of about 4,000 Promy fans at Wonju Gymnasium in Wonju, Gangwon, the Promy held the ceremony after a game against the Jeonju KCC Egis.

Kim played his entire career in Wonju, and the club commemorated that by retiring his number, 32. Kim became the second player to have his number retired at the club, following in the footsteps of Hur Jae, No. 9.

“They probably expected me to cry but I decided to smile when I retire,” Kim said during his ceremony. “Since I had so much fun in my last season, I couldn’t cry. Wonju was my second home. I was able to have only good memories throughout 16 seasons because the fans cheered for me throughout, whether I played well or not.”

After graduating from Chung-Ang University, Kim was drafted first by the Promy at the 2002 KBL Rookie Draft. Kim is one of the few one-club players in the league.

Ever since his debut, Kim has been one of the league’s best players. Standing tall at six feet nine inches, Kim has great speed and shooting ability, making him a tough target for opponents to block. In 2002, the year Kim made his KBL debut, he led the Promy to a championship and won the rookie of the year award.

Despite his successful career, Kim was never Wonju’s main scorer or star of the team - he always played a supporting role. Even in his last season, 2017-18, he didn’t grab the spotlight. During this season, his playing time went down substantially compared to the 2016-17 season, when he played 22 minutes per game. At the beginning of last season, Kim averaged 13 minutes a game, but towards the end, his playing time per game was only an average of 10 minutes. Kim mostly appeared in the fourth quarter and served as the team’s “problem solver.”

By finishing the regular season with a scoring average of 5.26 points and 2.07 rebounds per game, Kim received the sixth-man award for being an outstanding substitute player during the KBL awards ceremony last season. In addition to being a good substitute player in his last season in the KBL, Kim also fulfilled his role on the team to lead the younger players outside the court.

As Kim played 16 seasons with the Promy, he’s gone through three name changes at the club. When Kim first started, the club was called the Wonju TG Sambo Xers. It later became the Wonju TG Xers, then the Wonju Dongbu Promy. Throughout the name changes, Kim led the Promy to three KBL Championship titles and five regular season titles.

In addition to the team’s accomplishments, Kim was selected as regular season MVP twice and the Championship MVP twice. Throughout Kim’s career, he was selected in the KBL Best-five eight times, scored a total of 10,276 points and picked up 4,423 rebounds, good enough to rank second in the KBL’s all-time rebounds record.

Kim had 1,037 career block shots, the only player in the KBL to ever exceed 1,000. Not only that, for eight consecutive seasons starting in 2005, Kim topped the league in annual salary.

“When I was a player, I wasn’t really good with ceremonies,” Kim said. “Even when I passed 1,000 block shots, I couldn’t smile a lot because it was an away game. I tried to control myself for the next game, but I kind of regret that.”

With Kim’s retirement ceremony on Christmas Day, his career as a professional KBL player is completely done. But he has gotten off to new start as a coach. Once he retired after the 2017-18 season, Kim left for California and started a coaching program.

“I haven’t decided on my direction yet,” Kim said. “I was thinking about the head coaches I played under when I was a player and thought about their strength in coaching. I’m in the process of figuring out what kind of coach I need to become.”

Kim briefly visited Korea to attend his retirement ceremony. Although he is not yet clear which kind of coach he will be, he knows exactly where he wants to work.

“After watching these many fans here cheer for the team, I started to think that I can leave the court now,” Kim said. “I’ll study hard and meet you back here.”