Consumer sentiment up, but still not good

Consumer sentiment up, but still not good 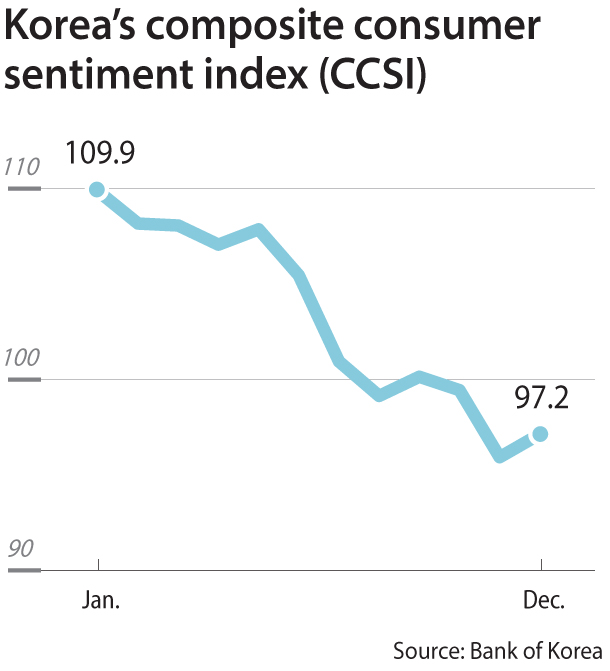 The country’s consumer sentiment rebounded in December after a downturn for the past three months, but the majority of the 2,500 households surveyed maintained a negative outlook for the economy.

The Bank of Korea said Thursday that the composite consumer sentiment index (CCSI) for this month came at 97.2, up 1.2 from a 21-month low of 96 the previous month.

Still, the latest reading remains below the 100 level, which means that the number of pessimists outnumbers the optimists. A reading above 100 points indicates that a majority of survey participants have a positive outlook on the economy.

Of the different indexes constituting the consumer confidence survey, respondents were particularly skeptical about the current and future status of the economy as the country faces different headwinds including worsening employment conditions, sluggish domestic consumption and dim growth prospects.

Prospects for future living conditions inched up one point to 91, largely due to a planned hike of the minimum wage in January. The outlook for future income also went up two points to 99.

“People have a positive view on their income thanks to next year’s minimum wage increase,” said an official at the Bank of Korea.

The number for expectations surrounding property prices also slid six points to 95 this month, affected by the government’s push to cool down the real estate market and rising interest rates.

“The consumer sentiment for property prices went down six points due to a slowdown in transactions, tougher screening for mortgage loans and the anticipated rise of interest rate hikes,” the official said.

Two out of every three real estate market analysts surveyed by the central bank expected the country’s housing prices to further decline next year in many regions.

In the survey released on Wednesday, the majority of the experts said that major cities including Seoul, Busan and Daegu will see prices decline next year. Only three regions avoided the gloomy prospects - Gyeonggi, Daejeon and Sejong.