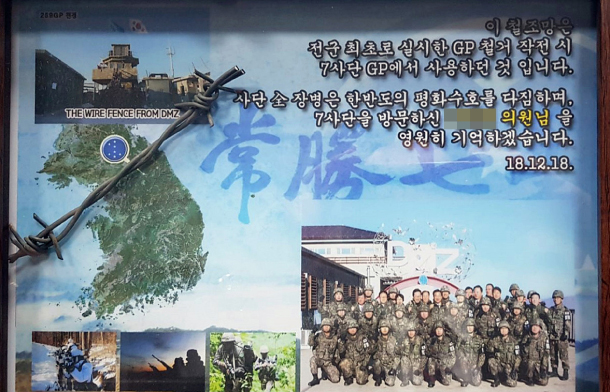 One of the picture frames given by the 7th Infantry Division to ruling Democratic Party lawmakers who visited the division’s base on Dec. 18. Inside is a piece of barbed wire that used to form part of a fence in the demilitarized zone (DMZ). [NEWS1]

The South Korean Army officially apologized on Wednesday after several of its officers earlier this month gave ruling party lawmakers pieces of barbed wire removed from the demilitarized zone (DMZ) as part of an inter-Korean military agreement.

Officials from the 7th Infantry Division gave the wire to lawmakers in violation of the Ministry of National Defense’s order to “preserve all debris from the areas withdrawn in the DMZ.”

The pieces of wire removed from guard towers, measuring around 7 centimeters (2.75 inches) each, were encased inside 11 frames containing maps of the Korean Peninsula and pictures from within the DMZ. The officers gave them to nine Democratic Party (DP) lawmakers and two other civilian officials who visited rural areas around the DMZ on Dec. 18 to talk to local residents.

After the issue made headlines on Wednesday, the DP’s secretary general Rep. Yun Ho-jung, one of the visiting lawmakers that day, said the gifts would immediately be returned to the division. Yun said the lawmakers did not know about the Defense Ministry’s order to preserve the debris.

The barbed wire in question surrounded 10 guard posts within the DMZ that were dismantled at the end of last month as part of an October military agreement signed by generals from South and North Korea.

The agreement was a follow-up to the summits this year between South Korean President Moon Jae-in and North Korean leader Kim Jong-un. The leaders agreed at their first summit in April to gradually turn the 240-kilometer (149-mile) DMZ between the two countries into a peace zone.

When the two leaders met for a third time in Pyongyang in September, they signed a military accord to “expand the cessation of military hostilities in regions of confrontation such as the DMZ” for a “fundamental resolution to hostile relations.”

Troops and weapons were withdrawn from a total of 22 South and North Korean guard posts by Nov. 30, with 10 being completely demolished on each side. One guard post was left intact and empty on each side as a symbolic reminder of the tense history between the two Koreas.

Following the completion of the dismantling operation, the Defense Ministry on Dec. 4 distributed a written order to all military bases across the country. The order said that “all debris from the 10 withdrawn guard posts be preserved, since deliberations are being made to use the debris for peace-related and cultural uses.”

Military authorities in South Korea appear to be preparing to build a memorial of sorts to commemorate the joint guard posts’ removal.

Both sides have expressed the hope that they can remove other fortifications from the DMZ. South Korea has around 60 guard posts along the heavily-armed border and the North has over 160.

South Korea’s conservative opposition did not miss the opportunity to reproach the ruling party and the military over the issue. In an official statement on Wednesday, the minor opposition Bareunmirae Party called the action “tantamount to embezzlement,” and said it reflects a lack of discipline that pervades the current military.