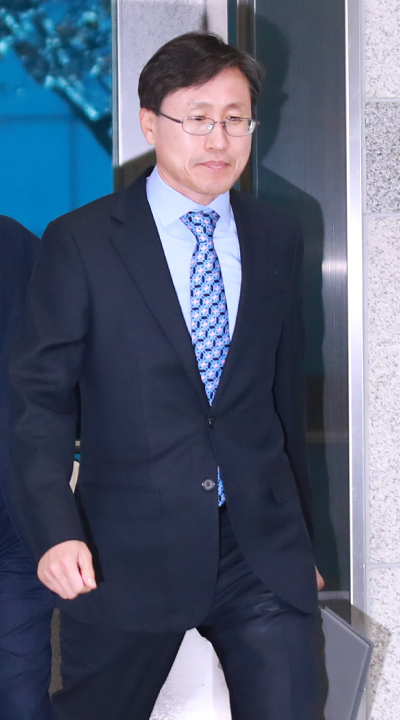 Jeong Byeong-ha, head of the Inspection Headquarters of the Supreme Public Prosecutors’ Office, walks into a press briefing on Thursday. [YONHAP]

The opposition Liberty Korea Party (LKP) urged the Blue House on Thursday to respond to suspicions that it compiled a blacklist of executives at public organizations affiliated with the Environment Ministry early this year, the latest in two weeks of revelations about illegal surveillance by President Moon Jae-in and his top aides.

The LKP initially raised the blacklist allegation on Wednesday in a press briefing, while revealing to local reporters a document leaked by an anonymous former member of the Blue House special inspection bureau. The member claimed that his team specifically ordered the Environment Ministry to draft the report, which the ministry submitted last January.

The bureau’s job was to look for corruption among top government officials tapped by Moon, usually ministers or vice ministers, as well as the president’s family.

After hours of refusal, the Environment Ministry acknowledged authoring the document in a press statement that was issued close to midnight on Wednesday but didn’t refer to the papers as a “blacklist.”

In a press briefing earlier that day, Blue House spokesman Kim Eui-kyeom detailed a list of people who allegedly knew nothing about the document: the former head of the Blue House special inspection bureau who served at the time the report was produced; presidential senior secretary for civil affairs Cho Kuk, whose office oversaw the bureau; and four presidential secretaries within Cho’s office.

Kim told reporters they could ask questions about the blacklist “some place else.”

The blacklist accusation was the most recent detail in a snowballing whistle-blowing scandal that erupted on Dec. 14. A former investigator in the Blue House inspection bureau, who was fired last month on allegations he intervened in a police investigation, claimed to local media that he was actually kicked out for bringing bribery suspicions against a prominent figure in liberal politics, Korean Ambassador to Russia Woo Yoon-keun, one year ago.

The investigator has since been leaking more details of his time at the presidential office to the local press, prompting the Blue House to file a complaint with prosecutors to charge him with disclosure of confidential information last week.

On Wednesday, the LKP revealed to reporters a document that was roughly entitled, “The trend of resignation of executives at organizations affiliated with the Environment Ministry.” Below that was a subtitle that read, “The status of resignation of executives at eight public organizations under the Environment Ministry.” A short summary of the report explicitly stated that “resignation procedures were proceeding without any particular disturbance or backlash except in the Korea Environment Corporation.”

A total of 24 executives of those eight organizations were listed in the report, profiling their affiliation, job rank, name, term and “status quo.” Among those figures, 14 were said to have submitted resignations and three were said to have been planning to.

Former LKP Rep. Kim Yong-nam, who is a member of a committee within the conservative party looking into the whistle-blowing scandal, said during Wednesday’s press conference that the former Blue House special inspection bureau member who provided the document said he personally received the report around Jan. 15 from a high-ranking official in the Environment Ministry.

While handing over the report, the ministry official was quoted as saying, “We’re receiving the resignation letters well.”

Rep. Kim claimed that the document was the first blacklist to have been unearthed in the Moon administration, and accused the Blue House of trying to plant its own people in top positions of the government. The former lawmaker, who currently works as an attorney at a local law firm, said he was informed the blacklist was definitely reported to the head of the Blue House special inspection bureau at the time, adding that further investigation was needed to tell whether Cho, the senior secretary for civil affairs, was alerted as well.

Two figures from the Korea Environment Corporation that were described in the alleged blacklist to have “resisted” calls to resign were a person who served as standing auditor at the time and another person who was head of management planning.

The standing auditor was supposed to end his term in September, the report read. In parentheses, the document read he was “from the Saenuri Party,” referring to the predecessor of the LKP. He left the corporation in April. The head of management planning was supposed to end his term in April, said the report. In parentheses, he was said to be “from the Korea Environment Institute.” The corporation did not immediately answer calls asking whether he finished his term or resigned earlier.

The ministry continued that neither the minister nor vice minister were aware of the document.

A former worker at the ministry’s Planning and Coordination Office admitted to the JoongAng Ilbo in a telephone interview Thursday that the ministry asked all executives in public organizations affiliated with the ministry to submit letters of resignation. The worker denied any fault in the procedure, however, saying that the ministry was trying to verify whether they were fit for the new Moon administration and planned to return the resignation letters if they didn’t find any particular issues - a normal process the former administration used as well, stressed the source.

Whistle-blower Kim used to work as an investigator at the Seoul Central District Prosecutors’ Office when he was temporarily dispatched to the Blue House special inspection bureau in July 2017 to monitor corruption. The Blue House fired him last month and sent him back to his original post, accusing him of intervening in a police investigation in which his acquaintance was involved. While sending him back, the Blue House asked prosecutors to scrutinize his time at the presidential office.

On Thursday, the Inspection Headquarters of the Supreme Prosecutors’ Office confirmed every major allegation that the Blue House held against its former inspector and asked the office’s disciplinary committee to sack him. If Kim does get sacked, he would lose his job as an investigator and be banned from reapplying for a public service position for the next three years.

The worst punishment he could have faced was being expelled, which would strip him of his job and make him unable to reapply for a public service position for the next five years.

The Inspection Headquarters, however, said it decided not to launch an official probe into Kim’s allegations because a probe of him was already ongoing in the Suwon District Prosecutors’ Office in Seongnam, Gyeonggi, referring to the complaint filed by the Blue House on accusations Kim was leaking confidential information to the media.

Among the conclusions reached by the Inspection Headquarters on Thursday was that Kim intervened in a police investigation that was linked to his acquaintance, who was facing bribery charges, and golfed with that acquaintance over five occasions and allowed him to pay the green fees, which amounted to approximately 2.6 million won ($2,320), a violation of the prosecution’s ethics code. Kim was also found to have golfed seven times with another source who paid 1.78 million won in green fees in total.