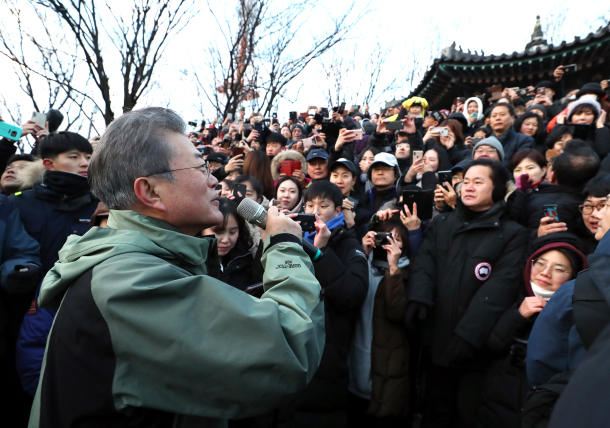 President Moon Jae-in emphasized his desire for a boost in the economy for the sake of Korea and all its people on Tuesday, a sentiment he has been stressing in cabinet and party meetings after his approval ratings dipped to the lowest level yet.

“The new year is called the Golden Pig Year, a symbol of abundance and luck,” Moon told a group of climbers during a hike on Mount Namsan on Tuesday morning to watch the first sunrise of 2019. “I hope that your household and workplace, as well as companies and our country, will be blessed by lots of abundance and luck.”

The need to improve the livelihoods of all was a theme in his formal New Year’s greeting on Facebook.

“All our people yearn to live a better life,” Moon said in a message posted on Tuesday. “I will look into things that we may have missed and will try to help improve everyone’s life.”

Terms such as “achievements” and “results” have appeared more frequently in his statements at cabinet and party meetings.

“Results are the most important,” he said in a meeting with ruling Democratic Party Chairman Lee Hae-chan on Monday. “The economy is at stake now. As our policies, such as raising the minimum wage and shortening labor hours, are implemented in steps, we will see results one by one next year.”

In meeting members of his cabinet on Friday, Moon said, “You’ve worked harder than any other administrations in the past, and because of that, having the right results would be important.”

Messages about economic results stand in contrast to Moon’s New Year’s address last year, which dwelled on fighting “corrupt employment practices, abuse of power and other deep-rooted evils closely knitted into our daily lives,” and creating peace on the Korean Peninsula.

Analysts said plummeting approval ratings are causing the president to shift his language and focus.