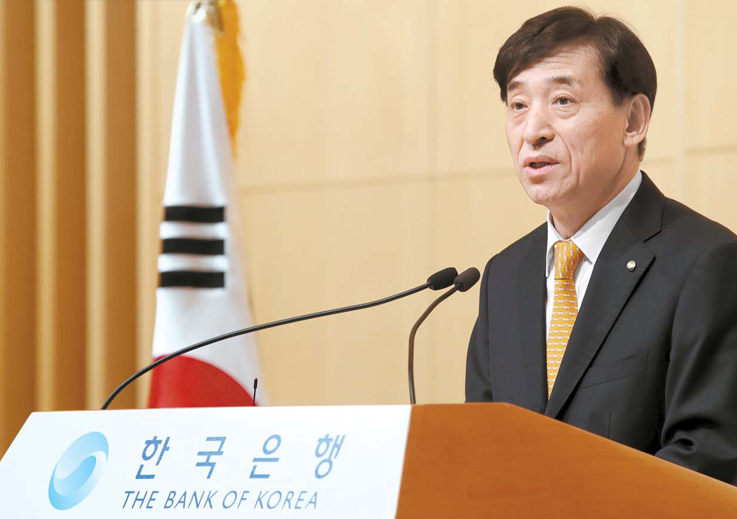 The chief of the country’s central bank said that the pace of interest rate increases at the U.S. Federal Reserve will be the main factor in determining Korea’s benchmark rate this year.

The comment follows Fed chairman Jerome Powell’s latest comments in which he walked back earlier, more hawkish sentiments expressed in October. At the time, he said that the rate was a long way from being neutral.

The chair adjusted his stance late last year, saying that the rate is just below the neutral level and that the Fed could slow down the pace of rate increases.

The shift came as shares declined and global economic headwinds strengthened, with a slowdown in trade expected and corporate profits showing signs of weakness.

“In deciding monetary policy this year, the U.S. Fed’s stance is more important than ever, though domestic economic conditions will play a role,” Bank of Korea (BOK) Governor Lee Ju-yeol told reporters on Tuesday in a press event marking the new year.

The governor expressed hopes that the Federal Reserve will ease up on the pace of rate rises. Slower increases could give the central bank more flexibility in managing its monetary policy.

“If the Fed moves up its rate more slowly - though that might indicate that the economy is not doing well - it can help stabilize the financial markets,” he said.

The Federal Reserve’s Federal Open Market Committee (FOMC) announced on Dec. 20 that it would increase its benchmark interest rate by 25 basis points, to a target range of 2.25 percent to 2.5 percent.

The move widened the gap with Korea’s key rate, which is now at 1.75 percent.

Governor Lee also expressed his concerns over the lower inflation rate in recent months as the price of oil has fallen.

“There has been a big change in prices,” Lee said.

The country’s consumer prices rose 1.3 percent in December from a year earlier, far lower than the BOK’s inflation target of 2 percent.

The central bank will maintain an accommodative stance through next year to stimulate the economy, it said in a statement outlining its 2019 monetary policy. The comments suggest that the BOK will be more cautious about tightening.

However, the growing rate gap with the United States could frustrate the accommodative stance.

“As the Fed will increase the rate twice this year, the burden of the discrepancy will keep increasing,” said Shin Dong-soo, an analyst at Eugene Investment & Securities.

“This will challenge the BOK’s accommodative policy,” he said.

Lee also warned of a tough year ahead, saying that unfavorable industry conditions and other external factors could weigh in the economy.

In the first trading day of the year, the Kospi declined 1.52 percent primarily over the concerns that China’s growth could slow.

The downbeat start came after a weak December in which stocks were pulled down by volatile markets globally.