Whistle-blower found before he kills himself

Whistle-blower found before he kills himself 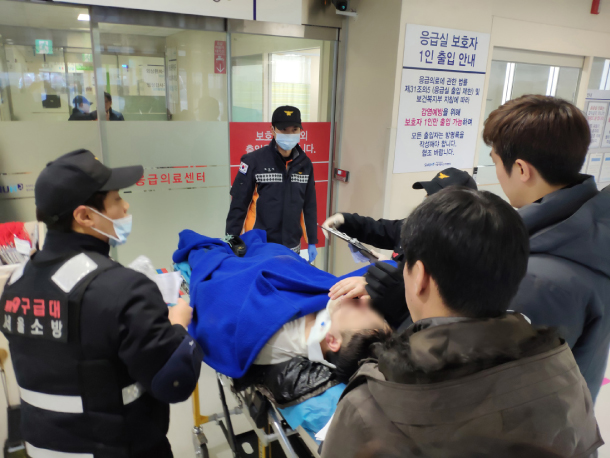 Shin Jae-min, a former bureaucrat who blew the whistle against the Ministry of Economy and Finance and the Blue House, is transferred to SMG-SNU Boramae Medical Center in Dongjak District, southern Seoul, on Thursday after claiming in an online post he was about to commit suicide. [COURTESY OF HANKOOK ILBO]

The former Finance Ministry official who accused the Blue House of fiddling with state coffers and intervening in private companies went missing for hours on Thursday after leaving a suicide note on the internet that read he was going to hang himself in a motel - until police found him alive.

Officers at Gwanak Police Precinct provided scant details to the local press about Shin Jae-min’s health condition but said he was hospitalized in Seoul in a “favorable state.”

Police refused to hold a press briefing detailing how they discovered Shin or what he was doing by the time they arrived at the motel in Gwanak District, southern Seoul, saying they didn’t want to “stimulate” someone who was already “mentally instable.”

Officers said they found Shin at around 12:40 p.m. The motel’s owner, who denied calling 112 to report Shin’s whereabouts, said the 32-year-old had checked in at around 2:30 a.m. in a black coat.

Shin threw the local media into mayhem Thursday when a newspaper reported at 10:48 a.m. that he left a suicide note at his home in Gwanak District and vanished after texting a friend at around 7 a.m. that he was going to kill himself.

Shin instructed the friend to “be happy” and said he personally was under stress lately.

When the news reports came out, many thought he was already dead, and Shin’s name quickly entered the top 10 most searched phrases on the country’s largest web portal, Naver.

Then at 11:19 a.m., a lengthy post was uploaded onto Koreapas, the community website of Shin’s alma mater, Korea University, under an ID that was frequently used by Shin.

Under the title “This is my last post,” Shin said he was going to hang himself in a motel on Thursday at noon after numerous failed attempts at his home.

In enormous detail, the former government official said he tried to hang himself in the motel room soon after checking in but that the knot in his rope was “too weak.” Some media outlets cropped parts of his suicide note because they were too graphic.

“It’s so hard trying to hang myself,” wrote Shin. “They say you pass out after 10 seconds, but I don’t even know how many times I failed back home … I’m sure I can die if I hang myself on [the motel’s] descending life line. I’m going to die now.”

In his post, Shin wrote that he thought people would trust him and his whistle-blowing accusations if he died.

Shin added he hoped Korean society would adopt a culture that embraces whistle-blowers and reveal how government policies are made to the general public.

Shin lamented blowing the whistle on a left-leaning government, saying he could have received legal help from Minbyun - Lawyers for a Democratic Society, a non-governmental organization with special consultative status with the United Nations Economic and Social Council, if he was whistle-blowing on a conservative Blue House.

Shin said he was “deeply disappointed” after hearing that every attorney in Minbyun refused to defend him if Shin revealed to the press he was being backed by the progressive group.

Shin said he was told by Minbyun that the organization would only help him in a criminal case, and under the condition he doesn’t tell the press that he’s being backed by it.

Police said Shin left a separate two-page suicide note at his home, but did not reveal what it was about.

The second whistle-blower to take on the Moon Blue House last month accused the presidential office of trying to change the chief executive of Korea Tobacco & Ginseng (KT&G) and local newspaper Seoul Shinmun, despite the fact they are both private organizations.

Shin also claimed that the Blue House forced the Finance Ministry in late 2017 to issue 4 trillion won ($3.6 billion) worth of deficit-covering bonds despite opposition from the ministry, which feared an increase in national debt.

The Finance Ministry denied those allegations and filed a complaint with prosecutors on Wednesday asking them to charge Shin with leaking confidential information about his work at the ministry.

Shin, a Korea University graduate who passed the civil service exam in 2012, officially started his public service career in 2014 as a fifth grade official in the country’s nine-rank public servant system.

Shin said he decided to go public with the Moon administration’s corruption because he hoped the government would make good on its pledge to eradicate jeokpye, or “deep-rooted evils,” allowing civil servants to work without shame.